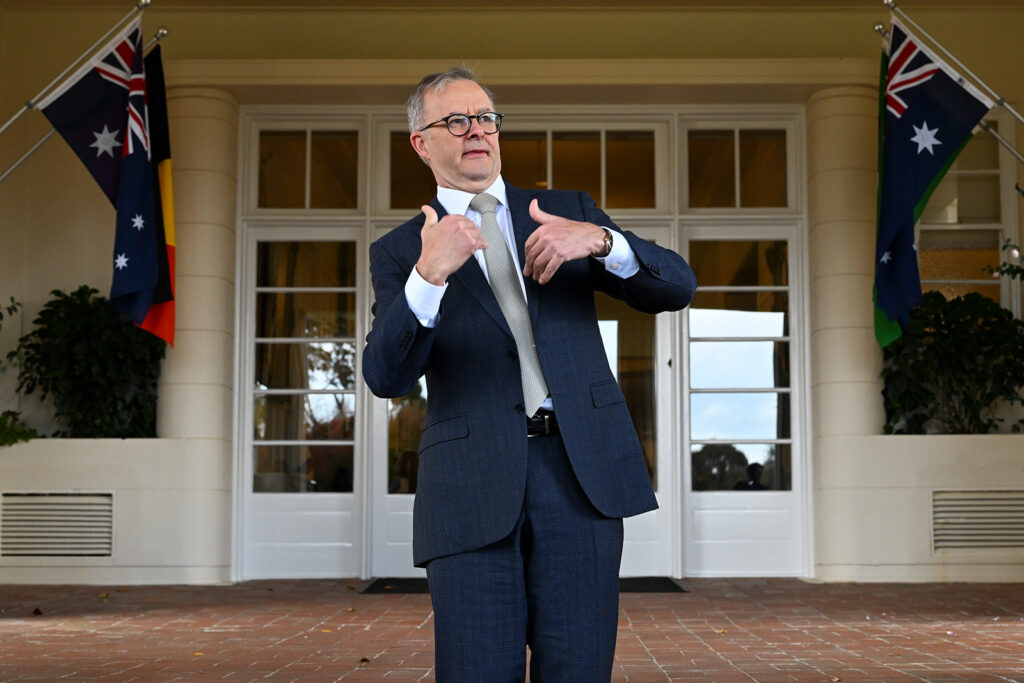 In December of 2021, The Shot published an article called ‘Australian politics is unequivocally fucked’. At the time, Australian politics was unequivocally fucked. The Jenkins Report into workplace harassment had disrobed the predatory environment at Parliament House, Christian Porter was avoiding anything resembling a consequence, and the government was trying to ram through a religious discrimination bill that would allow for more religious discrimination. It was Peak Morrison Era, depraved and depressing if you thought about it for longer than a glimpse at a sanitised headline.

On Democracy Day 2022, as the Australian Electoral Commission sharpened pencils and underfunded public schools fired up their BBQs, Australia drove the Morrison Government and everything it failed to stand for into the ground like a small child playing soccer.

Earlier that morning, Morrison had ordered Border Force to blurt out that an asylum seeker boat had been intercepted coming to Australia from Sri Lanka. Cynical last-ditch attempts to stoke fear in the electorate don’t come much more cynical; the actions of a sweaty desperate man doing everything and anything to keep the job except the job itself.

Scott Morrison’s footnote of a Prime Ministership, a graceless period of international embarrassment, making disasters of disasters, dog-whistle cruelty, outsourcing responsibility to fractured state premiers and spinning the whole ordeal into a goofy good time in symbiosis with Australia’s limp media pack is over. Unless you’re in the carpark-building industry or have a fetish for the furniture inside Parliament House, his term will be remembered without much fondness when it is remembered at all.

But last Saturday the country rejected more than just Scotty from Somewhere Else. It rejected the essence of the way Australia is governed. This election was a rebuke of self-interest, of a political (and media) class more invested in sucking itself off than looking after its citizenry; a rejection of actually important matters being ignored for politically important ones.

There is a third major party in Australia and it is called someone else. More than a third of Australians voted for someone other than a major party. That’s fucking huge. The landscape has been upturned.

Though the ALP walloped the Libs, it did so with a 0.5% national swing against it. The Greens achieved their best ever result, multiplying in the Lower House, finally giving Adam Bandt someone to sit with at lunchtime. Teal climate Independents unseated “moderate” Liberals, the Coalition losing face and previously never-lost seats, inner-city Melbourne and Harbour-side Sydney running them into the rising sea. Clive Palmer spent $100 million on ads in shitty newspapers and achieved sweet fuck all. Kristina “K” Kenneally’s parachute failed to open. And Josh Frydenberg got told to go and get fucked by the Victorians he shat on through two years of pandemic misery.

The mandate from the election is clear: the climate is fucked, get on with unfucking it. Wages have stalled and prices have risen, unfuck that too. The national discussion is Murdoched, distorted and unrepresentative of what Australians truly give a shit about, feel free to unfuck that while you’re at it.

All in all, not a bad result.

Or, as Sky News’ Rowan Dean describes it: “Now we are faced with three years of hardcore left-wing government that will destroy the fabric of this nation.”

“We will see our living standards crushed, our livelihoods damaged, our cultural institutions devastated, our kids’ future prosperity decimated because, despite every warning we gave you [at this moment Dean shakes his hands with exasperation], Scott Morrison and the bedwetters betrayed their conservative base, and then they all lost their seats!”

Ignoring the logic blackhole that conservative voters voted for less conservative candidates because the conservatives weren’t conservative enough, Rowan’s impotent rage is simply voice to Murdoch’s unfolding nightmare: an ALP government, a large progressive-ish crossbench, and his newspapers’ banshee howls being ignored by a public more switched on than we are generally given credit for. Incessant calls to shift the country ever rightward appear to have collided with reality and our preferential voting system.

The Murdoch message has become such an extreme parody of itself over the last few years it has neutered its power. Propaganda loses efficacy when it becomes this ridiculous. Even new Prime Minister Anthony Albanese wasn’t afraid to have a lil’ jab at the skewed campaign coverage. “To use the footy analogy, the umpires didn’t really go with us all the time. I say in front of some of those umpires here today. But we dealt with that, and maybe they don’t have as much influence as they think.”

As for the political wing of the Murdoch machine, after such a resounding defeat there are two paths forward for the Liberal Party. Either embrace things considered ordinary and reasonable in 2022, like climate science and women, or, as Sky is agitating, be wholly consumed by the party’s dominant psychopath faction. Under Dutton’s leadership, this is the more likely outcome.

Though Dutton has already pledged to unite the Liberal Party’s bombed out ruin of a “broad church”, he also spent years fueling racist fears about African gangs in Melbourne, sued an activist for insulting him on Twitter, oversaw the nation’s offshore refugee gulags, and was caught on camera joking about Pacific Island nations drowning due to the climate crisis his party has long denied and ignored. If the Liberal Party’s unique brand of cruelty had a face…

As for the Albanese Government, without it having done very much at all yet, its mere existence is an improvement, so petty and pointless was the Morrison era. The changes needed in Australian politics are structural as much as they are personal, and the last few years cannot be washed away with one election, but there is hope where once there was none.

This is a rare opportunity for the Labor Party to change the country for many years to come, to reframe every important conversation we have around wages and climate, health and education, refugees and minority rights. But this will take more than the odd quip at corporate media. We have been promised a federal ICAC by the end of the year and Albanese has committed to finally embracing the Uluru Statement From The Heart. New environment minister Tanya Plibersek has hinted she might reverse Susan Ley’s decision to abandon 176 species – including the Tasmanian Devil and the whale shark – to extinction. Joe Biden remembered Albanese’s name. There’s even an assistant minister for the republic now, which is going to make monarchists absolutely lose their shit.

Just how committed the ALP actually is to combating the climate crisis and not just appearing to do so remains to be seen, though. In fact, it’s highly suspect. New Resources Minister Madeline King has already committed to supporting WA’s $16.5 billion Scarborough gas project, and the science is in on this one: gas is definitely one of those fossil fuels we need to stop using ASAFP. And for all Albanese’s talk about growing up in public housing, he remains mute on the prospect of raising JobSeeker above poverty levels.

The Albanese Government has the clearest path for progressive reform it possibly could, should it actually have the will: a majority in the House, a clear warning from voters to stop faffing about, and the Greens controlling the balance of power in the Senate.  The ALP has the opportunity to outgrow its reputation as perpetually disappointing. If it doesn’t it’ll have no one to blame except itself.

But think of where we’ve come from. The depths we plummeted under 10 long years of Coalition rule and the responsibility vortex of the Morrison Government.

Australian politics is slightly less fucked now. And there is hope in that.