General News
Allow yourself to dream, Australia. Morrison may be at his end
May 13, 2022 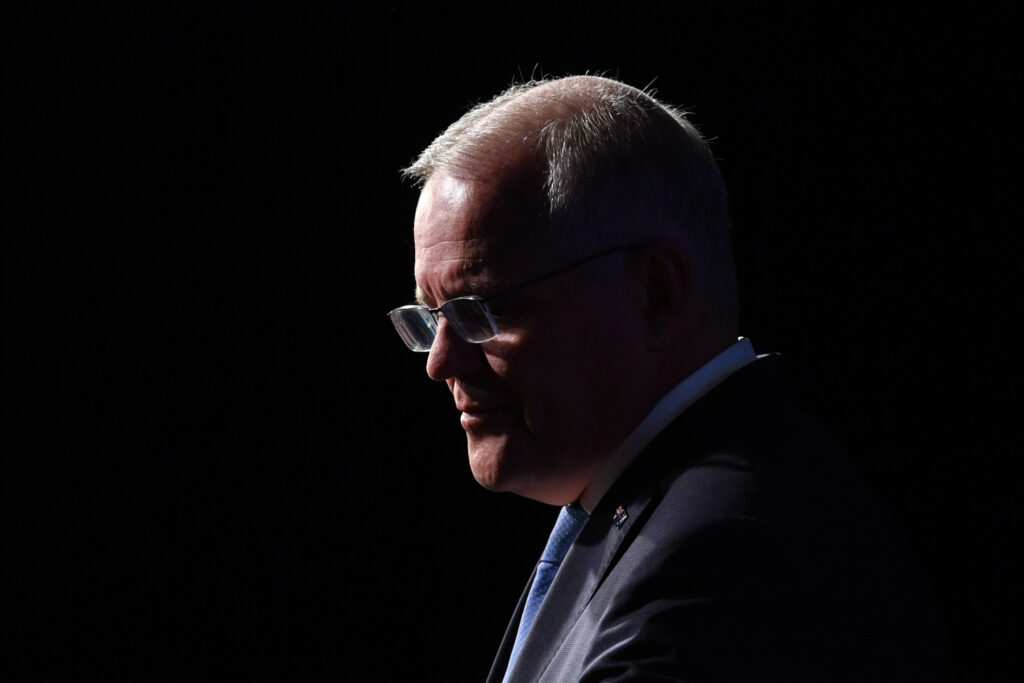 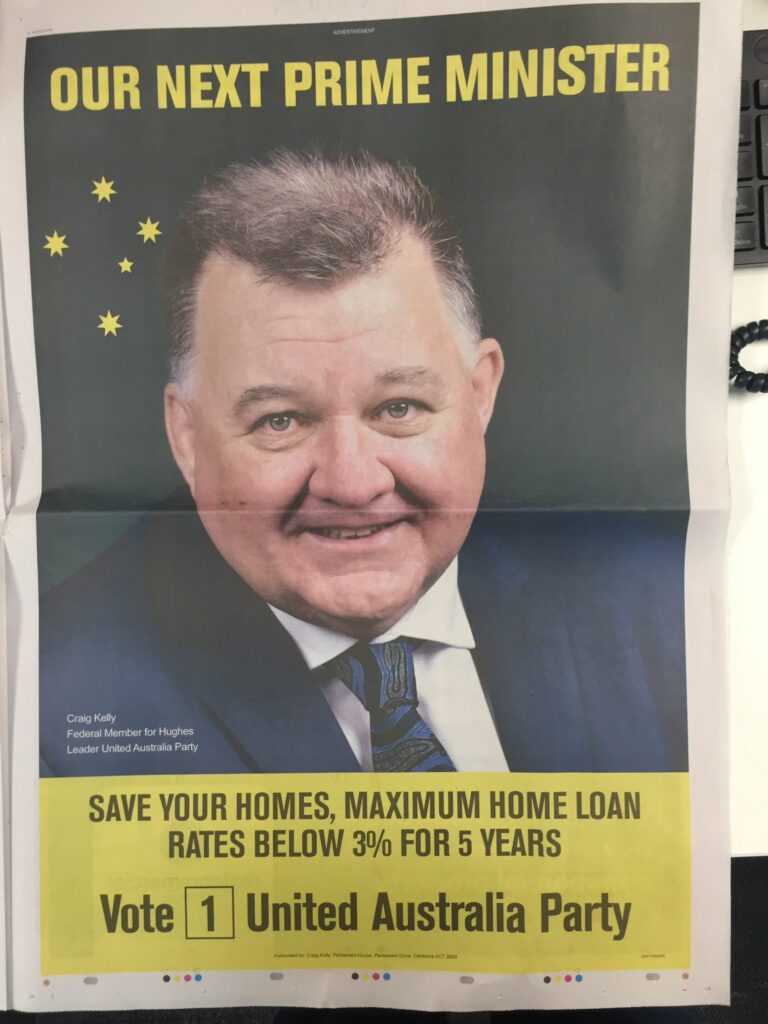 Sure, things could be better, but they could certainly be worse.

We have now endured three televised leaders debates (none of which featured presumptive Prime Minister Craig Kelly for some reason). One no one watched on Sky News. One that devolved into a screeching squabble and triggered half a week’s worth of “hey, that was a pretty great debate!” stories from Channel 9’s newspapers. And one on Channel 7, free-to-air TV’s racist drunk uncle, which somehow provided a smidgen more substance amongst the gameshow trappings and the “pub test” voting system. Devastatingly, the worm still lies dead and buried.

Requiring minor sedation to endure the third stale pale male back and forth, I popped half a valium before popping on the TV. It did not help much.

Scott Morrison, the Prime Minister for the next few days, basically kept it together. He wore his most empathetic human face and stared down the camera, feeling the pain of the small business owners that might need to pay minimum wage employees an extra dollar an hour. He then stressed the strength of the economy under his tenure, somewhat undermining his point about businesses not being able to pay employees a dollar more, but what-fucking-ever at this point.

He assured Western Australia – a state oddly singled out and given its own mini-debate within the mass-debate, tehehe – that there would never be a mining or carbon tax under him. He described Albanese as a “loose unit”, and, when asked by the moderator to say something nice about “Albo”, couldn’t help letting his inner dickhead shine: “Anthony grew up in public housing and made his way to the top, which I admire, but on the economy he just makes stuff up and that’s dangerous.”

Albanese, for his part, appeared ever so slightly less dickheadish than Morrison, a fine quality that will almost certainly see him become Australia’s next Prime Minister.

Albanese was able to present himself as the candidate that wants the “heroes of the pandemic” to get paid more, supporting a meek wage rise in line with inflation. That he didn’t push for an actual wage rise above inflation speaks to how far the discourse has shifted to the right – the entire political class more than happy to support the looming $15.7 billion per year stage 3 tax cuts for the wealthiest Australians while being embarrassed to do any more than let our poorest cling on to the lowest, greasiest rung of the social ladder.

Wary of providing too much hope, he then assured Australia’s xenophobic beating heart he would be just as cruel to refugees, refusing to settle anyone that manages to slip past Fortress Australia’s patrol boats. If this issue is dear to your heart, do remember that Australia has preferential voting for a good reason, and that minority governments are not the dysfunctional blight the major parties like us to think they are.

Albanese went on to attack the PM on his handling of the fires, flood, and vaccines – all entirely justifiably – but was able to refrain from having a jab when asked by moderator Mark Riley to be complimentary of ScottyMo. “Scott cares about his nation and has done a lot for mental health”. Not my mental health, but hey, that’s not the point.

The pub test gave the night to Albanese, but the real winner was everyone who had something else to do.

And, because of Scott Morrison’s personal standing of being actively loathed by much of the country, many key Liberal A-listers have a lot else to do.

Much has been made of the groundswell around “teal” independent candidates in dark blue Liberal seats. There is a more traditional “small l” Liberal voter abandoned by an increasingly religious, bigoted, and cruel party drifting ever rightward under Morrison. These neglected voters wouldn’t dare return a Labor or Green member but just might elect a locally minded representative with reasonable concerns about not destroying the climate and weeding corruption from politics; someone successful, presentable, safe and unlikely to kick up a fuss about negative gearing or cutting funding to private schools.

If Australians are reluctant to talk about politics, their front fences hold no such qualms. Zoe Daniel’s face peppers the streets of Brighton; a plethora of placards, a raging contest of corflutes in the heart of Goldstein. Since the electorate’s inception in 1984, it has been held by the Liberal Party. Tim Wilson, the sitting member – best remembered as the man behind the nonsensical “homes first, super second” push – has billboards of his own but, to the naked eye, far fewer of them than Daniel. His margin of 7.8% feels less safe than it should.

In Kooyong, Josh Frydenberg’s mug is locked in endless frozen staredowns with Dr Monique Ryan’s, the former head of neurology at the Royal Children’s Hospital. Frydenberg is needing to work far harder than he usually would to retain his seat, engaging in televised debates and keeping the stench of Morrison well away from his electorate. “People need to know that if they want to keep me as the local member but they may have an issue with something that the Liberal party has said or done, and they want to give us a kick for that, at the end of the day that may not leave me as the local member. Which is, of course, not what I want,” he said.

I didn’t want you to shit on Victoria for two whole years during the worst of the pandemic, but we don’t always get what we want, Josh!

If Ryan wins, and it increasingly looks like she might, it would be a remarkable occurrence; Federal Treasurers don’t lose their seats at elections. It’s almost genius on Morrison’s part – by being sooooo disliked, he could take out any viable challenger to his claim of being opposition leader.

Naturally, the opinion, news, and opinews pages in the Murdoch press have not taken any of this well. 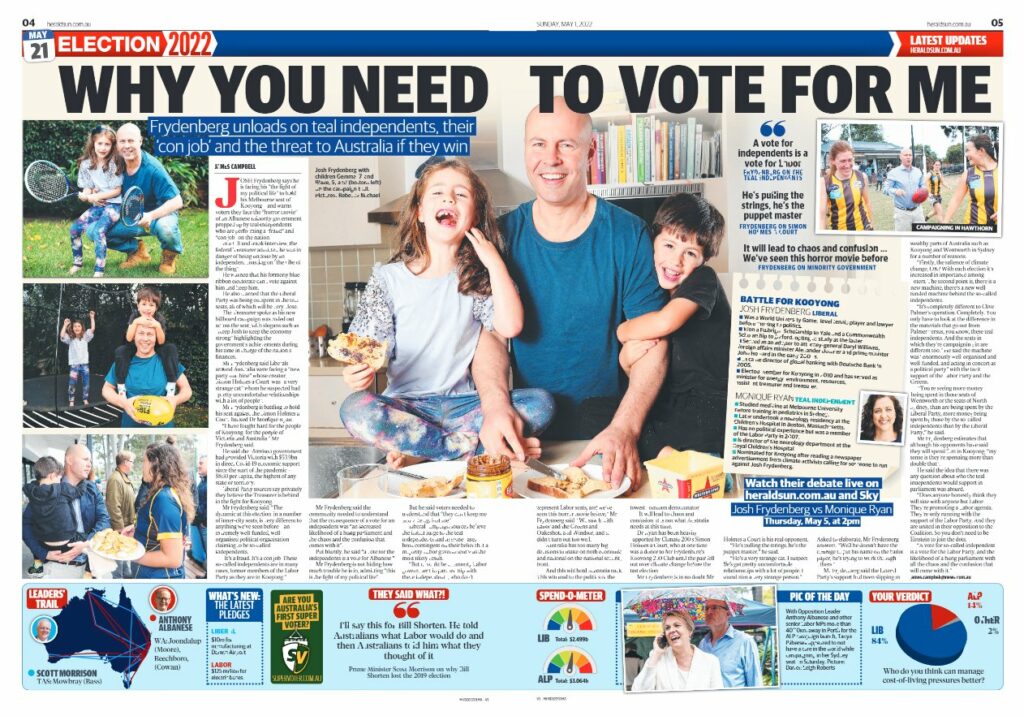 “Why you need to vote for me”. “Frydenberg unloads on teal independents, their ‘con job’ and the threat to Australia if they win”. “Federal treasurer warns electing teal independents will be a horror show for our country”. That people still think this is a newspaper baffles me.

NewsCorp editors clearly sense a threat to the dominant order, and they are responding with fear. 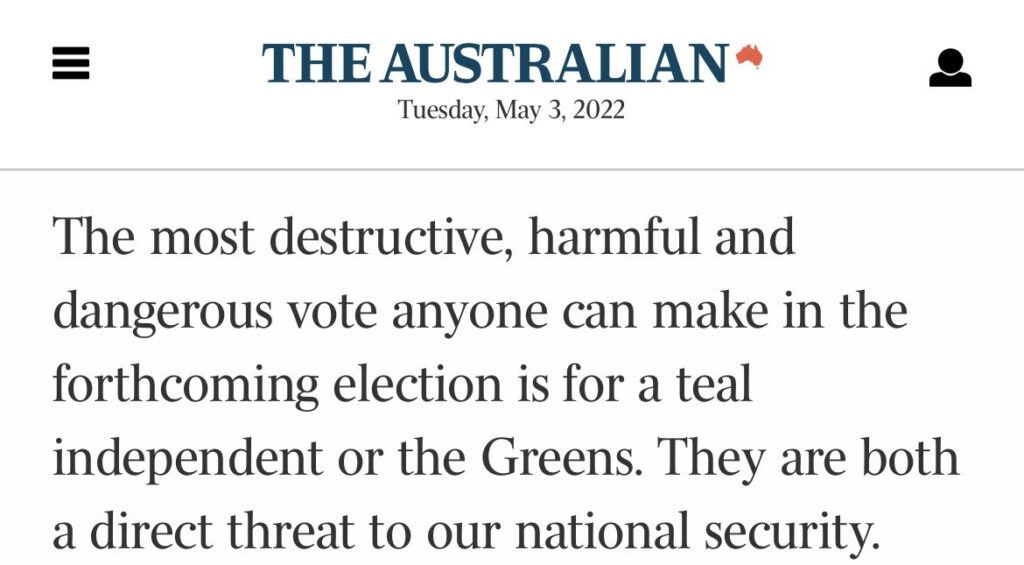 As a diligent and anxious Australian that takes our national security seriously, I checked this claim with ASIO. The security agency’s most recent annual report does concede today’s threat environment is “complex, challenging and changing” but spends the bulk of its focus on things like espionage and terrorism, not people wearing greenish t-shirts. There is no mention of the security risk posed by independents, or Greens, but there is no mention of jamming knives in toasters or electric eels either, so it could be an oversight.

Being jumpy about national security is one thing, but the existential threat posed to democracy by exercising the democratic right to not vote for the Liberal Party is another matter entirely. 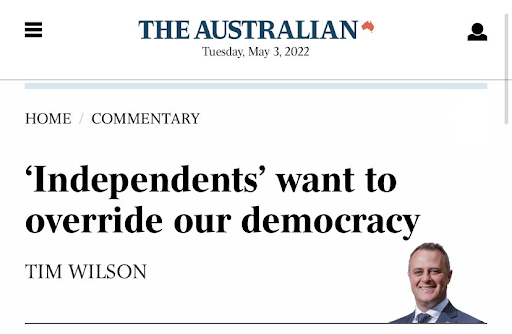 In a bizarre screed in The Australian, Wilson warns that voting for “so-called” Independents and not people like and specifically including Wilson would see Australian democracy collapse on itself. He cites the Independent’s commitment to setting binding carbon emissions targets as undemocratic, and, with dispassionate and objective distance from the issue, appears to really, really want you to vote for him.

been a real eye opener experiencing how enmeshed newscorp is with the liberal party.

slanted article is printed, reinterpreted by sky, then spread by MPs.

Peta Credlin, in her role as one of the many Liberal mouthpieces on Sky News, agrees with Wilson. “Why these Climate 200 guerrilla games matter is not just that Liberal seats could fall, but that Liberal campaign hardheads could waste time and money trying to hang onto electorates that by right shouldn’t be at risk”.

Concerned about democracy this time and the right of the Liberal Party to hold certain seats, I checked these claims with the Australian Electoral Commission.

We wouldn't use that language. From our politically neutral standpoint, voting in a free and fair election for a candidate of your choice sounds like the very definition of democracy. Plus you can have a sausage.

Who to believe: the impartial body set-up to oversee fair elections or the Liberal Party and its media wing?

Too much has changed for things to stay the same. Politics as usual feels unseemly. Distasteful. More of the typical – rorts and fear, indifference, distraction and cruelty – is no longer acceptable for a growing number of pissed off voters readying for the most important Federal election in recent memory. A new parliament filled with new voices holding a new government to account is the balm Australia’s soul needs.

We all distrust our Spidey-sense that the Morrison era is finally at an end. But allow yourself to dream, Australia. Rub your temples. Inhale. Exhale. It could all be over soon.