General News
America is, surely we all know by now, fucked
May 4, 2022 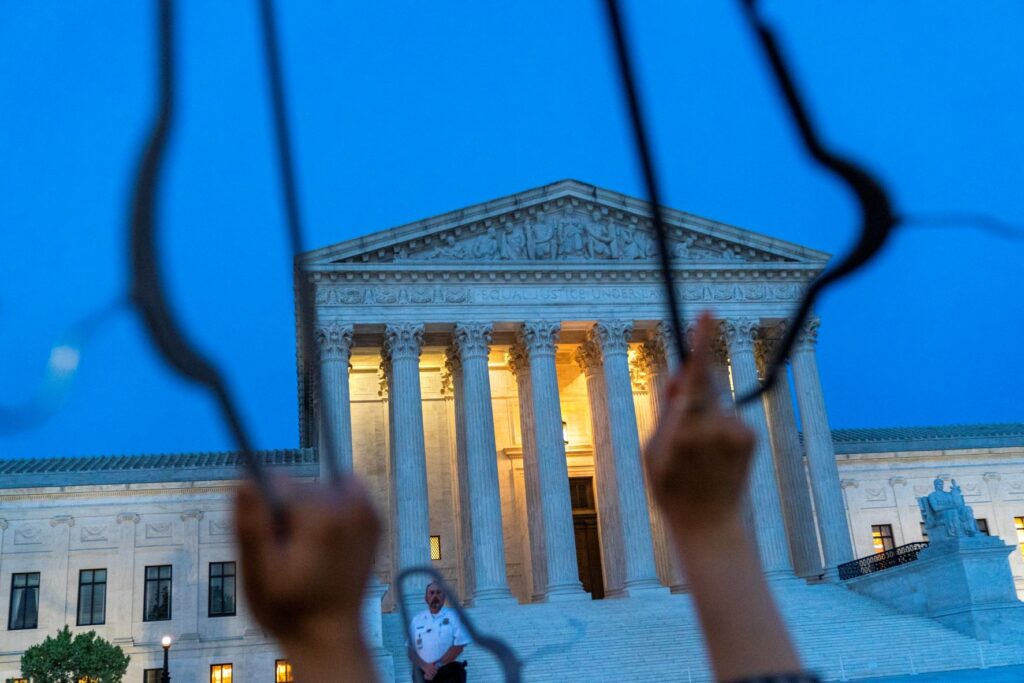 “Roe was egregiously wrong from the start. Its reasoning was exceptionally weak, and the decision has had damaging consequences.”

So says what is apparently a draft of the majority opinion of the United States Supreme Court, yet to be delivered as its most socially significant decision since the judgment it will be overturning: the seminal 1973 abortion legalisation case, Roe v Wade. The new case is Dobbs v Mississippi.

History has already been made, if this draft is legitimate, because it’s the first time ever that such a document has leaked from the Supreme Court. That drama will pale, however, next to what happens if Roe v Wade falls.

It was the defining case of the civil rights movement, arguably less important than the ending of racial segregation but of seismic significance in its recognition that the US Constitution protects the right of women to choose what to do with their own bodies. The court drew a line at the third trimester and what it defined as viability (the point where an unborn child may survive outside the womb), not that the fight over abortion rights has ever truly been about that distinction.

Now, it looks like the wet dreams of generations of the religious right, promised by Donald Trump’s assiduous stacking of the Supreme Court with hard-core conservatives, will be coming true and Roe will be gone. As the draft opinion says, “It is time to heed the Constitution and return the issue of abortion to the people’s elected representatives.”

The legal reasoning isn’t, in truth, ridiculous. Roe was always a bit dodgy from that perspective, since the Founding Fathers had no intention of protecting the right to abortion or any other women’s rights for that matter; they were being literal when they said that all men are created equal. The Constitution is indeed silent on abortion, and the argued right had to be found between the lines. Consequently, it was always susceptible to being overturned.

Not that I’m defending the nutbags on the right-hand side of the court, either. Their intellectual dishonesty is exemplified by their dealing with one of the arguments for preserving Roe” that a law restricting abortion is a “sex-based classification”, that is one which discriminates against one gender, and therefore requires “heightened scrutiny” from a rights perspective. No, they say, “the goal of preventing abortion does not constitute invidiously discriminatory animus against women”; they are no more special than “other health and safety measures”. Bugger the entire history of sexist repression, it’s not a thing.

The true evil in the majority’s approach is what it champions as the basis on which any human right should be found to be protected by the US Constitution: “whether the right is deeply rooted in our history and tradition and whether it is essential to our Nation’s scheme of ordered liberty”.

That is a clear signal of direct peril to any of the many other protections that have been found to deserve protection over the years, such as same-sex marriage, the right to have gay sex in your own home, the right to marry a person of a different race, and so on. None of these can be found in the words of the Constitution, but more importantly none is deeply rooted in America’s history or tradition. Nor, for that matter, are equality for women, people of colour or people with disability.

The problem, of course, is that Americans must constantly resort to their 18th Century constitution to seek protection of basic human rights because they cannot find them in civil discourse or congressional debate. Apart from the liberal fringe of coastal states, it is hard to find social attitudes at a legislative level in the United States that are much more advanced than those of the Taliban. To illustrate: once Roe goes, up to 30 US states will legislate to effectively re-criminalise abortion altogether. Many will allow no exceptions whatsoever, even in the case of incestuous rape of a minor or where the mother’s life is in danger.

America is, surely we all know by now, fucked. It is paralysed and incapable of rational discussion or progressive change, so it ends up, on fundamental questions like the autonomy of women over their own bodies, with simply a dichotomous choice, left in the hands of judges who are now absolutely pure ideological avatars for their sponsors.

Consequently, Roe v Wade has the status of a temple, and its toppling will be felt like an earthquake. The leaked opinion purports to address this, saying, “We do not pretend to know how our political system will respond to today’s decision overruling Roe”. They know as much as a terrorist would know about what will happen when he lets off a hand grenade in a crowded hall. Which is to say, enough.

I fear that this call, when it is officially made by the court, will tear at America’s fabric far more deeply and irreparably than even the events of January 6 2021 when Trump tried to end its democracy altogether. We can’t fully appreciate it from this distance and in our Australian context of the lazy assumption of rights which we can rarely be bothered trying to protect. But trust me on this.

It is going to be very, very bad.