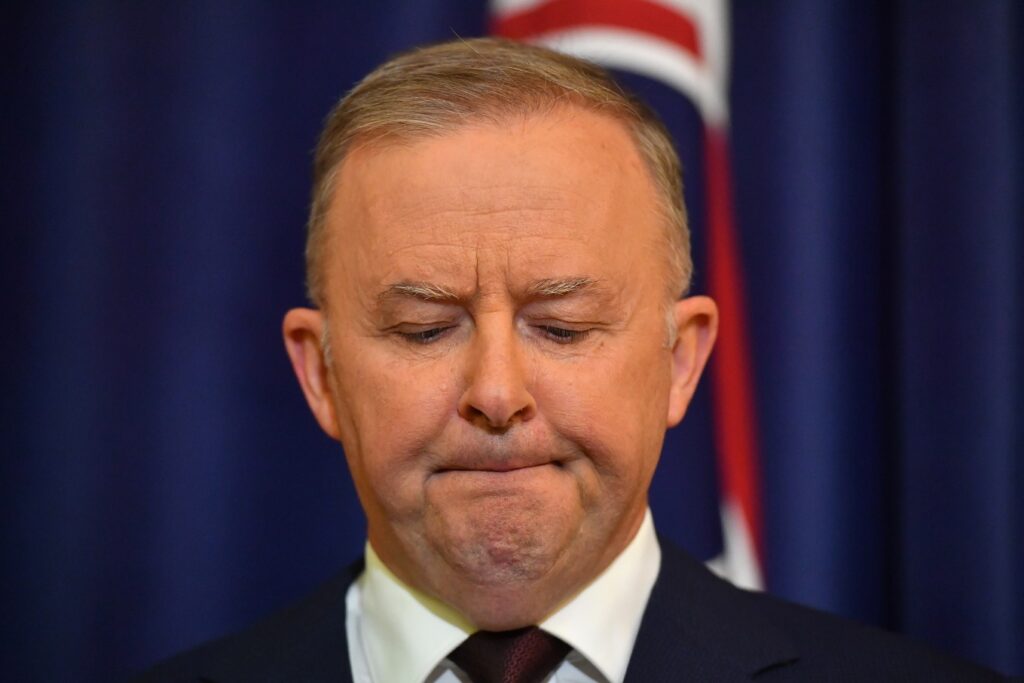 The twisted part of Australia’s soul is naked to the world on January 26 each year. We are the only country anywhere that still marks colonisation and genocide beginning with a piss-up and a spot of beach cricket; a cruel, amnesiac celebration with bipartisan support.

One side ideologically committed to everyone knowing their place. The other, who knows? Cowardice? A perceived lack of political capital? Either way, it is not pretty.

Australia Day, we needed to admit many years ago, is a national embarrassment. We are not the nation we like to pretend we are, and our annual disingenuous coloniser’s conversation about ourselves proves this. The nation restricts criticisms of this holiday to “offensive” and “insensitive”, when it is so much worse than that. It is actively hostile. It is violent. It is a conqueror with a boot on the neck of a proud but dispossessed people, saying, “We won, and we are choosing today, of all days, to celebrate that fact.”

And everyone important in Canberra is seemingly fine with this.

Melbourne’s Invasion Day gathering this year was larger than ever. It dwarfed any comparable pro-Australia Day history-book-burning ceremony or Neo-Nazi camping trip to the Grampians.

It was peaceful, respectful, family friendly. More representative of mainstream Australian sentiment than any troll of a national award like the Order of Australia, flung like monkeys fling shit, for outstanding services to homophobia, to men’s rights activism, and – just to hammer home how troll-y this day is now – for destroying a nation’s Internet, munching on an onion, and having the distinction of being our most shirtless Prime Minister.

Melbourne’s streets, empty in solidarity last year, were filled by it on Invasion Day 2021, as far as the eye could see. 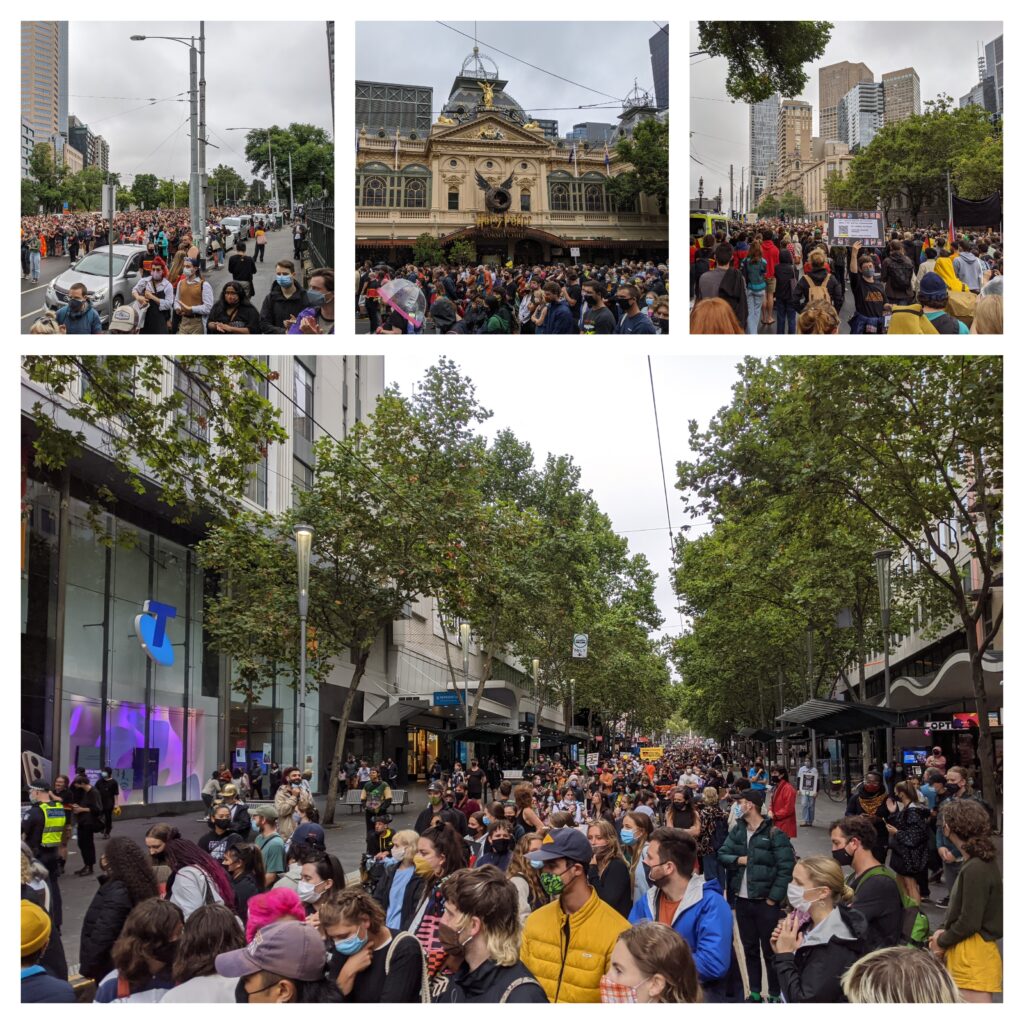 Filled not by radicals and malcontents, but by ordinary people. Shitloads of them. Masked, distanced as sensibly as possible, and utterly over it. But you wouldn’t know that if you only read our kitty litter liner of a local newspaper. 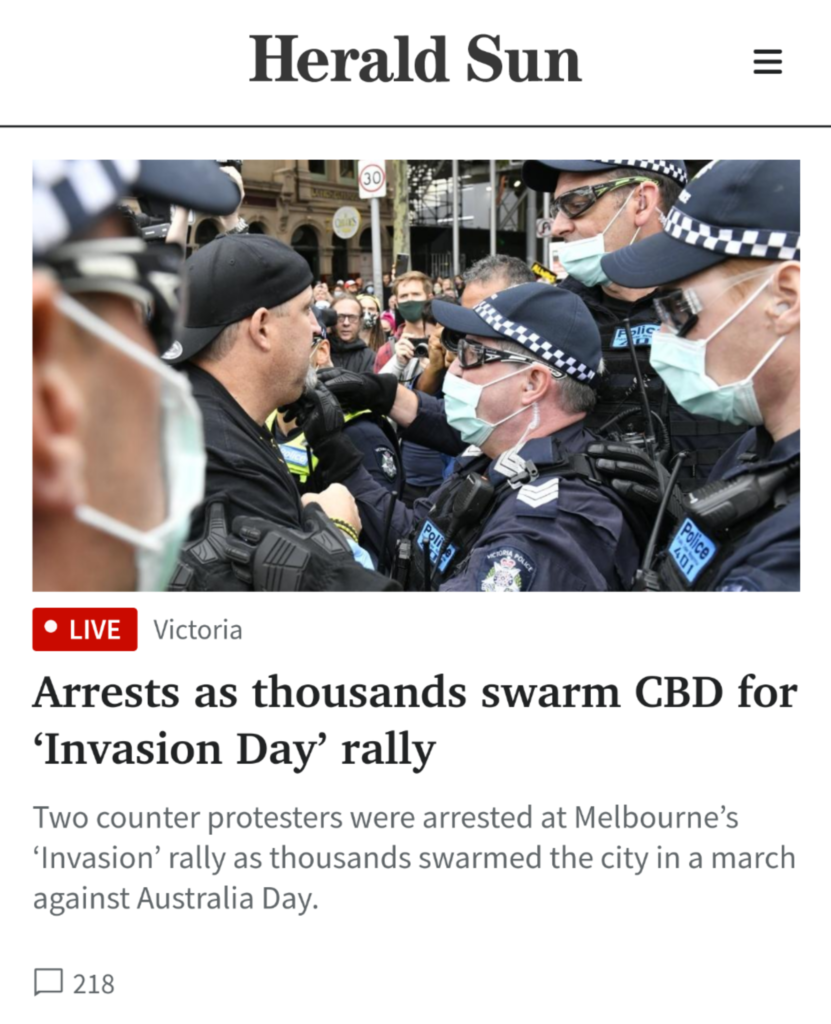 The Herald Sun chose to frame these extremely ordinary people as having “swarmed” on the CBD. I took the train. Swarming is something insects do.

Every instance of invasion is in quotation marks. And the implication of trouble, of scariness, in this headline – the only part of the Herald Sun that actually matters – disguises the fact that the only people arrested were Avi Yemini, a notorious alt-right YouTube grifter who espouses fairly similar views to The Herald Sun, and his goon. I witnessed this extremely pre-meditated arrest firsthand, alongside this absolute legend of a local signpost.

Avi Yemini being removed from the Invasion Day protest by police (I did not witness what led to this moment but I'm sure I could guess) and an appropriate sign in the immediate vicinity. pic.twitter.com/zXbNUeQGIt

Avi Yemini is yet another of Australia Day’s many trolls. He presents himself as an outsider, as anti-establishment, as “Rebel News” – posturing while he spouts the establishment view that Straya Day is just a chilled, laidback day for sickcunts to get on the sauce. He is as rebellious as being a piece of shit wife-beater.

Australia Day is the day our nation’s conservative rulers are given a pass to be even crueller than usual. It is the day white supremacy dons a suit and prods at the empathetic side of this nation, all under the guise of not causing a fuss. We treat the act of disturbing our weaponised, “comfortable” “peace” – thank you John Howard – as a greater sin than our great original sin.

It is not dissimilar to US Republicans saying, “Forget about that little undemocratic sedition thing. We must heal, together.” Some beliefs and actions, specifically these ones, have no part in the healing process.

Australia Day is not beers in the sun. It is weaponised jingoism; the reason our most fuckwitted wore flag capes to the Big Day Out. It is a short-lived relic of a bygone time, formalised only as recently as 1994, but with far longer roots of kicking down at the downtrodden. In 1938, the sesquicentenary (that’s 150 years, FYI), Aboriginal people were physically chained, held at Redfern Police station, and then forced to re-enact their dispossession on the beach for the nation in a farcical display of pageantry and white amusement. How can such a day be salvaged?

This scaffolding – our abused national awards, our racist national holiday, and our world’s-worst media landscape – has been erected around our violence. It allows us to pretend we are not cruel, and yet its very existence is cruelty.

And into this framework steps Anthony Albanese: shatterer of the hearts of the people who give a shit.

A referendum on constitutional recognition for First Australians being held on 26 January would be a unifying moment for our nation https://t.co/gY4ER2m6lr

To suggest redeeming Australia Day, recasting it as a “unifying moment”? All while quote tweeting Australia’s Fox News equivalent? I don’t know whether it’s too early to make the call after only 600 days in the job, but perhaps leadership in difficult moments is not this man’s strongest suit?

When it comes to the baffling ALP doctrine of presenting the smallest possible target to a hostile, rabidly partisan press and a savvy, cunning Coalition, Albanese appears a zealot. There is little that can be done from opposition, this is true, but at a certain point a leader needs to at least appear to be up for the fight.

He of course faces an uphill climb – all Labor leaders do – but his strategy of digging down is questionable. Small targets can create the appearance of potentially small Prime Ministers.

And now, dispiritingly, lacking whatever it is Albo lacks in important moments is a pattern. We know, thanks to those extremely clever scientists we insist on ignoring, that today’s humans are the only ones that can do anything about the climate crisis. Hanging in the balance? Not only what life on this planet looks like, but also just how much future humans despise us.

The legacy of our time, should we mess this up, which we are doing, will be one of failing our species. Our best intentions will be dust, and none of the good things we also do will matter. The art, the love, the kindness, the beauty – all meaningless to the billions of humans not born yet but who one day will be just as real as those of us alive now. Billions, unrepresented in our time.  And when these future people have the mental bandwidth to think about us at all amidst their unnecessarily harder lives, they will despise us.

And they will be justified in this. Because we made their lives harder. More miserable. Deadlier.

And Anthony Albanese chose this crucial tipping point in human history to support, with barely a rebellious whimper, one of Scott Morrison’s most brazen instances of cronyism: “the gas-led recovery.”

The gas-led plan, decided upon by an undemocratic panel of Morrison-appointed gas executives. A group of astonishingly rich people who did very little to help during the pandemic, only to then emerge waving a fairly sus report saying that gas – yes, gas – is the path forward for this windy, coastal, sun-drenched nation. We could be world leaders in a renewable energy economy. Instead, we are embarrassing.

And our potential Labor Prime Minister thought this was a good moment to stand for nothing at all? I understand Joel Fitzgibbon’s coal electorate is at stake, but so is my son’s future.

Morrison has clearly sided with the lump of coal he waved around inside Parliament House. We should not expect better from him. He will only escape the revulsion of billions of future humans because, on the longer timeline, he is not important enough. Rupert Murdoch will be reviled, because he is. And Albo, along his current trajectory, will be lucky to garner a footnote.

And The Greens. Man, the Greens. God they’re trying. On the climate crisis at least, correct about basically everything you can prove with science and evidence and lab coats and numbers – and yet being right is rarely the real battle in politics. The battle is to win. And The Greens are to winning what Albo is to spines.

The odds are of course stacked against them even harder than the ALP, but again, on the longer timeline of our species, that too will not matter in the slightest. The brutal reality is humanity needs significantly better organised, more powerful political parties to care about this issue as much as parties like The Greens do. Or we will have fucked it.

The Greens, it should be acknowledged, stand alone as the largest of Australia’s political parties to have the guts to call out Australia Day for the archaic, violent, embarrassing, colonial holiday it so clearly is.

And so here we are. Left with a national day no one really likes – even the bogans were over it this year, barely a drunken flag to be seen – receiving the same bipartisan support from a cowed opposition as countless planet-destroying, short-sighted policies.

It’s reasonable to demand better of everyone claiming to be worthy of leading us. Because as it stands, as members of a species as much as we are citizens of a country, all of these political leaders reflect poorly on us as human beings.