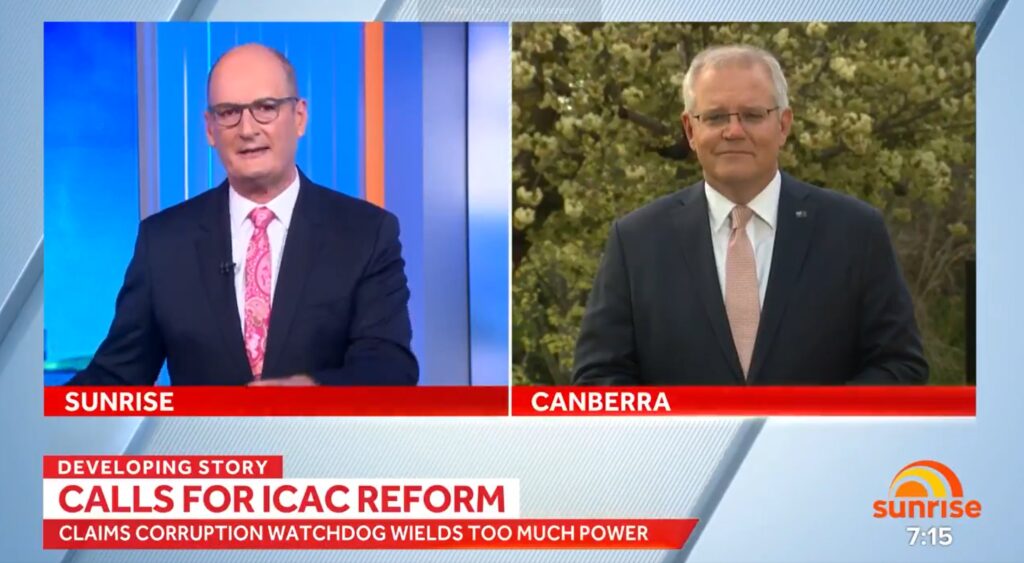 It’s still dangerous. And irresponsible. Detrimental to the healthy functioning of Australian democracy. But funny, too. This is not typically what you want from news media – bias so unrelenting it’s amusing – but these are dark times and we should take laughs where we can find them.

On Monday, Melbourne’s 35th Monday spent in lockdown, day 247 overall, the moment 5 million Melburnians seized the Golden Sweatpants for most locked-down people in the world from the presumably equally frazzled citizens of Buenos Aires – salut and solidarity, brothers and sisters 😵‍👊 – The Australian fucked a pie like it was 1999.

Rupert Murdoch’s big boy newspaper mangled the concept of graphs, polling data, and some of the basic principles of how numbers and words work, all in a single tweet. 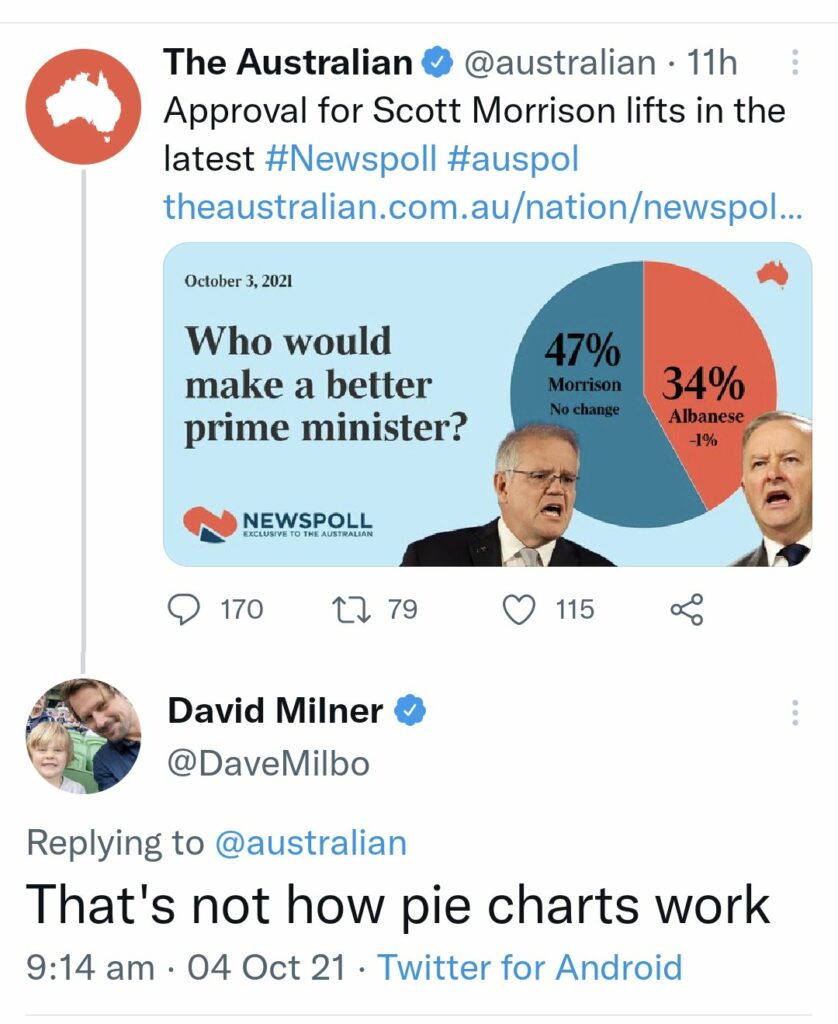 The Australian’s pie, a magic pie – which it fucked – depicts 47% as significantly larger than half a pie. Dolloped on top of that 47% slice of fucked pie are the words “no change”, indicating this large blue pie slice was also the same incorrect size the last time it was fucked.

Just pixels away, in the headline, the “no change” pie slice – remember, this is the slice that hasn’t gotten any larger – is described as being a “lift” in pie size/support for Scott Morrison, our Prime Minister… somehow.

This is a wonderful piece of mathaganda (it’s 250 days into lockdown, I’m allowed to make up words now). The soiled pie was live for more than 11 hours, giving The Oz’s 771,000 followers ample time to absentmindedly digest it before my extremely tired, low-effort tweet destroyed it, sending it into oblivion, no correction published – the pie’s job done, a shitty Prime Minister bolstered ever so minutely, influence influenced, rot wrought. 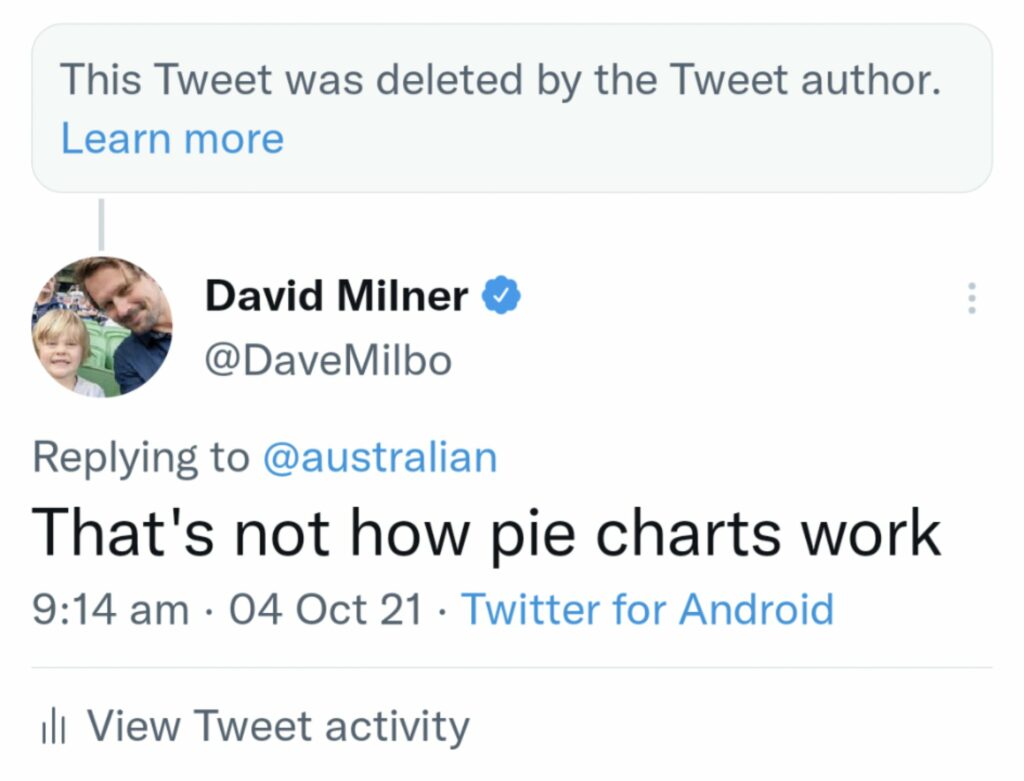 The point, as ever with any form of politically motivated misinformation, or propaganda, this insignificant and stupid or otherwise, is the surface layer impression which is hammered home in micro increments by sheer mind-bludgeoning repetition over many, many years.

That’s how they get ya: the gradual normalisation of ideas and rotting standards that should definitely not be considered normal.

Humans have a remarkable ability to acclimatise to almost anything. Consider the fact you’re now somewhat used to spending 22 hours inside, wearing a mask, and treating passing strangers and sales people as free therapy. This adaptability trait is helpful, but it’s also easily weaponised against us. Gradually, the incessantly simmering ideology disguised as news that we absorb leads us to believe nonsensical things we’d know aren’t true if we just thought about them for a few seconds.

Big blue pie!! Clean coal, carbon sequestration, the gold standard, LiBeRaLs ArE bEtTeR eCoNoMiC mAnAgers, stopping boats, something something tradies and utes, the war on the weekend, and alllllllllllll that other shit. These phrases are pulled meaninglessly from the void and attached to positive associations and the serious handsome faces of Team Blue, negative connotations and the sweaty mugs of the franking-credit-thieves and grandma-shatterers of Team Red. This effluent is distilled and refined enough for regurgitation throughout the electorate, and these concepts are presented to us as truisms and not just Liberal Party catchphrases that mean sweet fuck all in reality. They are given credence and credibility by a media landscape lacking both.

Nothing normalises nonsense, rot and decay like a good persistent narrative. And a sea of talking heads and front pages in the holding-power-to-account industry deciding the whiff of corruption is in fact the smell of dignity and grace and flowers, because it’s wafting from the industry’s favourite politician, Gladys Berejiklian, was one hell of a persistent narrative this week. 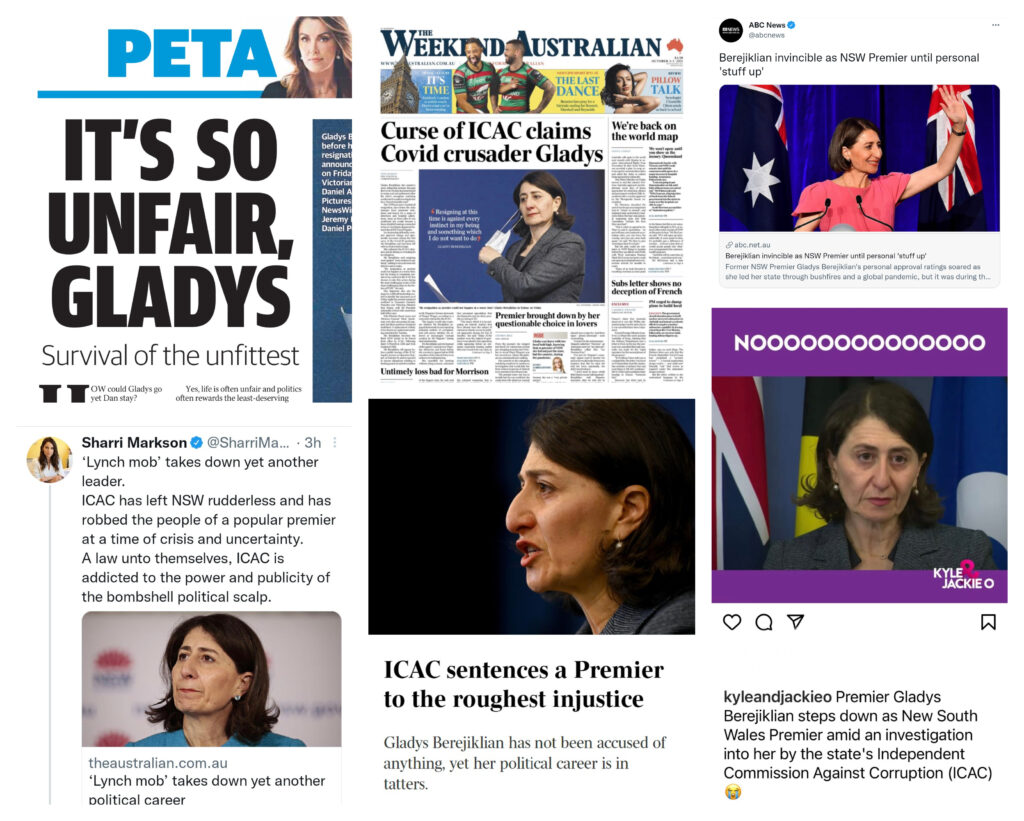 At a very basic level, journalists are meant to be less chill than this. When a politician resigns following the announcement of a corruption investigation into their conduct – followed closely by two of their senior colleagues – that’s probably not the best moment to blanket the land with hagiography and stoke a narrative that NSW’s ICAC, the Independent Commission Against Corruption, is an undemocratic body that has gone too far by taking down a bastion of competence and compassion, a woman unlucky in love, the BEST and most human of us all.

Take it away, Kochie, ya prick.

Our finest political journalists and analytical minds, and Kochie, should probably know better than to ask the Prime Minister questions like: “It’s put a lot of focus from the general public on ICAC, who are thinking, ‘Who the hell are they? Who are they responsible to? And who reviews them?’ Does ICAC need reform?”

Much has been made of Morrison’s comment in response to Kochie’s boot swallowing. “That is a real problem. It is not a model we have ever contemplated going at a federal level… I’m sure there are millions of people who can see what has happened to Gladys Berejiklian and understand that’s a pretty good call not to follow that model,” he said.

Frankly, I don’t mind Morrison’s comment. He’s a politician. He’s meant to be this obviously corrupt, and coming out against the corruption watchdog is fairly obviously related to all the corruption in his Government. If anything, it’s more enlightening than lots of the journalism on this subject has been.

But journalists, even Kochie, deciding to frame this as a problem with the anti-corruption body and not, you know, corruption in politics itself, is the exact opposite of why this profession exists in the first place.

That so much media is pining for the loss of BFF girlboss Gladys instead is a key reason our politics is as depraved as it is. Media and politics are more intertwined than ever, and Australia is suffering for it.

Of course Morrison doesn’t want a federal ICAC – but literally every journalist should. It is, basically, the entire point.