General News
These creeps are going to make the next few weeks harder than they need to be
September 23, 2020 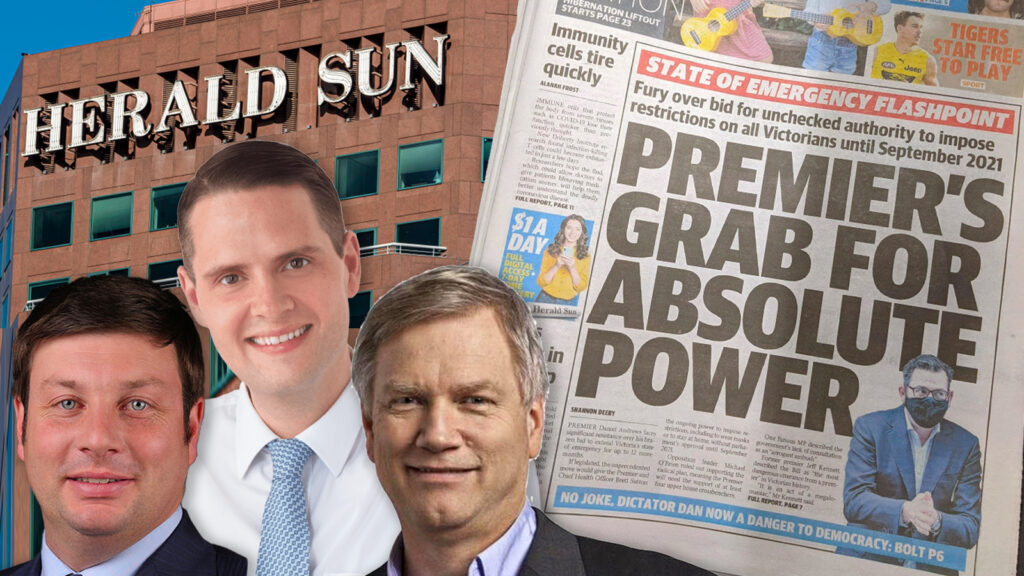 My beautiful but astonishingly pooey two-year-old has handled himself through this pandemic with more grace than Melbourne’s largest newspaper. And the Victorian Liberal Party. Both of whom should feel grateful I’ve listed them as distinct entities.

Riley waves at trains and laughs at the little “Spoonvilles” that have popped up inside our 5km dome. 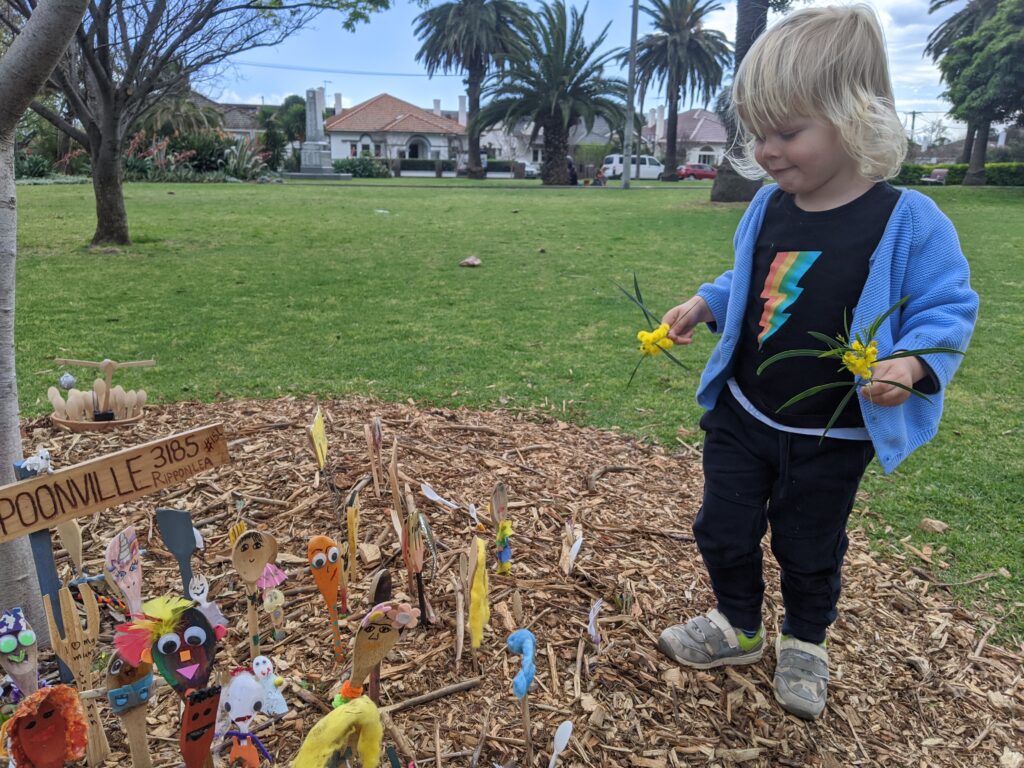 I’ve had to cut his hair during lockdown, and I’m so, so sorry about the results

He climbs trees. He makes his mum draw Iron Man over and over and over. He picks flowers, drinks babyccinos, poos, and watches TV. He can go on the swings again now too. That’s about it though.

And when the news gets better, News gets worse.

Saturday. A sunny reprieve with a then record low of just 21 cases (!), and the Hun promised us this.

“Rolling coverage”. “The big one”. “Like nothing you’ve ever seen before.”

How’d it turn out?

I don’t want to be glib, but I have definitely seen 30 bored assholes singing John Farnham before. I’ve been to school formals. I’ve been to bad work functions.

We’ve all seen this before.

It’s literally just a small bunch of weirdos showing up to a shopping centre, singing one song (quite well, credit where it’s due), and then piss-bolting from the cops.

The only part of this that’s “like nothing I’ve ever seen before” is just how empty Chadstone is. That’s the emptiest I’ve ever seen it. Pretty spooky, really.

I do want the media to get to the bottom of this hotel quarantine thing. We all deserve to know what happened. But, along the way, please, for just a few more fucking weeks, could you stop making Melbourne’s most impatient Facebook users sound like Nelson Mandela?

You’re failing your city. And who, but your city, do you serve?

Perhaps most importantly – to you at least – it’s falling on deaf ears now. You’re pretty much only getting through to the angriest weirdos. No one with any influence, no one still clinging onto their last grasps of sanity, is listening anymore.

The only tangible impact your dIcTaToR dAn tantrums can possibly have is rallying more numpties to the cause, messing up all our collective progress – everything we’ve worked so hard for, everything we’ve sacrificed so much for – and keeping us inside longer than need be.

And, you know, killing more of us.

Murdoch columnists are coronavirus superspreaders and should have been closed under Melbourne’s stage 4 restrictions.

And the funniest thing about all this? Sections of the Murdoch press have realised. They’re starting to acknowledge how badly they’ve read the room here.

They’ve seen that 70% of Victorians, right now, just want everyone to shut up and watch Schitt’s Creek while we get this over with.

They’ve seen that a poll of more than 2000 Victorians found 57% of us think the Victorian Liberal Party hasn’t been even remotely helpful during the pandemic.

We’ve gone through such a shock, such a trauma, the fact most of us are still inoculated from this brand of bullshit is incredible. We. Absolutely. Rock.

It’s so incredible, in fact, that news.com.au followed our lead and basically did our stupidly viral story about how awesome Melbournians are right now… FIVE days after we did it. 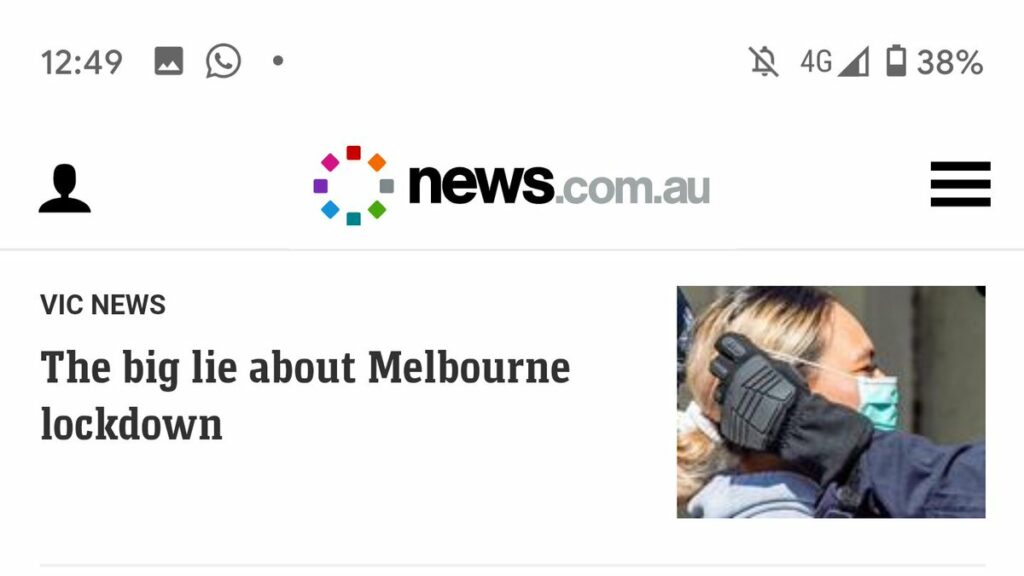 Which is great. Because it’s all true, and the message is what’s important.

But I wish they left in the parts about how it’s mostly Murdoch-owned media stoking this mysterious “big lie”.

No idea why they skipped that. What’s the go, Media Watch?

We literally made Murdoch tell a little truth for a day or two, made them sweat that they’d backed the wrong horse – and we’re just a few bored loudmouths trying to keep busy because otherwise we’ll keep obsessing about the mythical treasures six kilometres away.

Imagine what this city could collectively do about these creeps if we decided to? Ponder that for the next few weeks, please.

And while our egos are raging out of control about that last piece, we’re also gonna claim this. 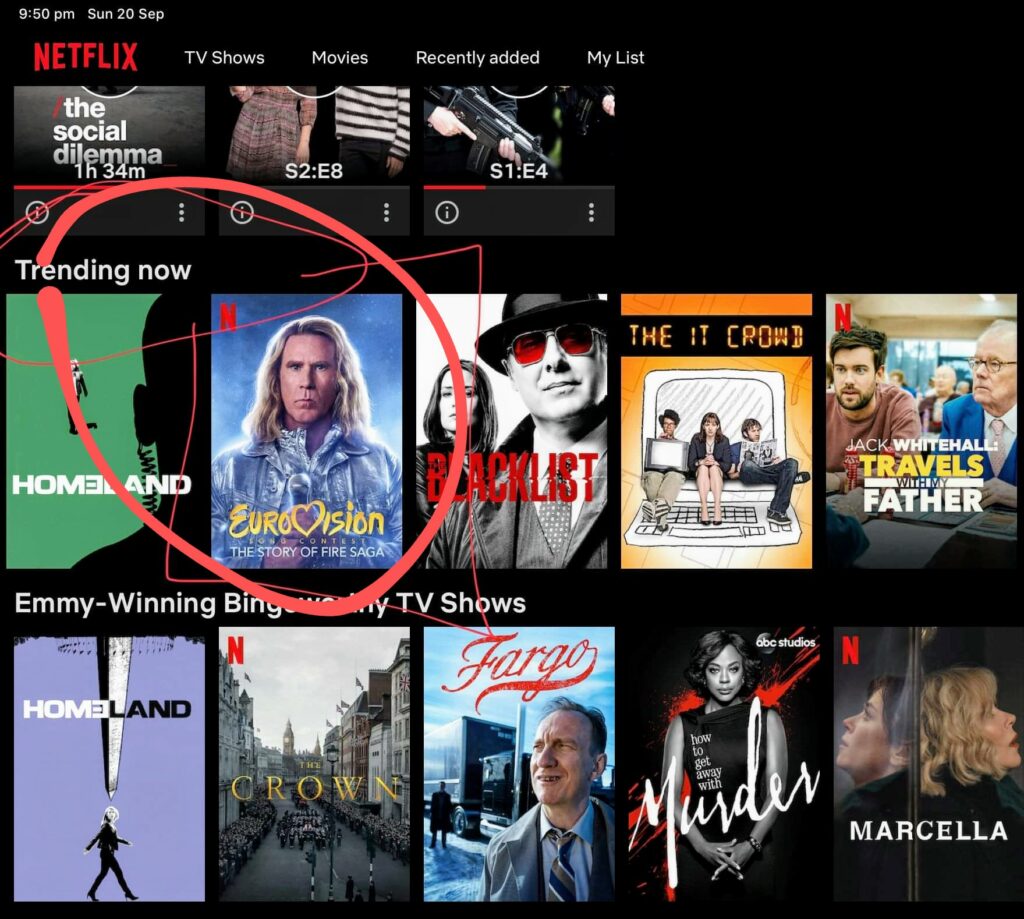 Tim Smith. What a dickhead.

I’m constantly worried he’s going to hurt himself walking into a recently cleaned glass door. This is the man who lost his own rigged Facebook poll because he can’t count.

One of the loudest voices demanding an end of lockdown, and more grandma death, since this mess began. A man who, for some reason, keeps trying to convince us more people would have died on his watch. Not sure that’s a great strategy, but go off mate.

May 13. Twitter. “In Victoria with control freak wowsers like Dictator Dan running the show, you can’t even sit down for a coffee, let alone a beer. Our Premier is such a friendless loser, of course Victoria has no plans to reopen licensed venues, who would invite Lurch for a drink? #danhasnomates”

That aged about as well as Victorians during lockdown.

Back in The Early Pandemic Era, Tim Smith tried to round up a posse to go get rid of all the bats in his Kew electorate, because of coronavirus. He tried to make being noisily anti-bat a problem for the government. I cannot think of a more cooked attempt at a wedge.

Try to put yourself in the headspace of someone genuinely enthusiastic about Tim Smith’s kill-all-the-bats plan during the height of a pandemic. Fark me.

More than any other pollie, Tim has repeatedly, overtly called Victoria a dictatorship. But the least democratic aspect of this state is how unviable the opposition is. That’s a genuine threat to democracy.

Because it is reasonable right now for people to be looking for alternatives. But all they’re finding is a clown car that’s losing rigged Facebook polls, impatiently demanding more grandma death, introducing a vote of no confidence in the middle of a very successful lockdown, and trying to kill the bats for some reason.

The opposition is the best thing going for Daniel Andrews at the moment. (Other than, you know, all the good news.)

James Newbury. My local member. Three toddlers stacked in an oversized suit. The guy who nearly lost his seat last election to a 19-year-old with a $1,750 campaign spend, a 19-year-old that admitted he didn’t really want to win because it would ruin his gap year.

Newbury doesn’t get as much attention as Tim Smith because he’s not as good at this, but he does deserve some scorn too.

Here he is, in a now deleted tweet, some Murdoch stooge nesting dolled in the middle, claiming the “exercise police” were out in force rounding up totally normal, not-at-all-unhinged jerks driven nuts by all this. 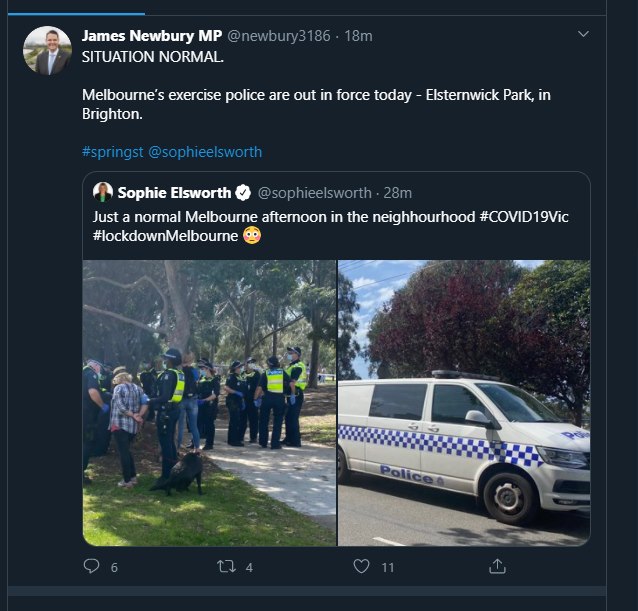 That the Liberal Party is now needing to position itself as anti-cop is remarkable. (Almost as remarkable as some lefties positioning themselves as pro-cop – watch it, that’s a trap right there.)

When Newbury’s not conveniently tangential to branch stacking scandals, he spends at least some portion of his time in a private Facebook group for people from my suburb. And they spend their evenings calling him a fuckwit in ever more creative ways. And he’s just in the room, reading the comments, like an absolute creep.

It’s locked-down Melburnians banding together, finding solidarity in a shared activity, not dissimilar to those iso gigs from Lockdown 1.0 like when Powderfinger briefly reunited (kind of), except it’s just bored people calling their state member a fuckwit. And he reads it all.

And before you start feeling sorry for James Newbury, he is a fuckwit.

He wrote this extremely racist dogwhistle op-ed in The Age about how the cops should release crime data broken down by race. This was at the height of the African Gangs™ Scare Campaign. The one that Christopher Pyne forgot about because it was so stupid.

Andrew Bolt. I’m actually not going to bother with him today because I think that will piss him off even more. But you know. You just do. You don’t need me to say anything, because you know.

(And the leader of the Liberal Party. What’s-his-face. Michael something. That guy too.)

The point I most want to make is this:

The last few months have sucked. They’ve been so hard. And I don’t think there’s any good reason to pretend otherwise. But we’re so close now. The weather’s getting better. Daycares are on the cusp. We can have FRIENDS OVER SOON.

We could, as a city, realistically turn the collective mood around and start feeling OK about [waves hands desperately] all this.

And all we had to do to achieve that was IGNORE EVERY SINGLE THING The Herald Sun and the Victorian Liberal Party told us to do.

So, for the next few weeks, while we’re just trying to get through this unbearable, frustrating, anxious – but potentially not-too-awful little stretch – just fuck off for a few weeks.

Just go away! Keep getting paid. I don’t think any of us would mind that. Just don’t mess this up for us. Stop encouraging noncompliance, stop making good ordinary people more anxious than they need to be, and just go do some fucking jigsaw puzzles or something.

I acknowledge extremely angry, extremely right-wing people need things to do as well. And I’m happy you’ve found a hobby. I just think it could be something other than undermining our response to a tragic global health crisis.

Just fuck off for a few weeks while the adults sort this out.

We’re a city fluctuating between feeling intensely mortal and intensely bored. Having way too much to do, then not enough. Coping fine, THEN NOT, then fine again. Have we finished all the wine? Curfew now, sorry.

Just stop making it harder for us please. It’s so simple and not much to ask. My horrifically pooey toddler is managing to do this for the most part.

More than anything right now, genuinely, I just want a hug. Mostly from my parents, but wholeheartedly from anyone with a recent negative coronavirus test willing to have me in their arms.

And I’m so close to being able to have that.

Not just without the help of these creeps – but in spite of their best efforts to ruin it for the rest of us.