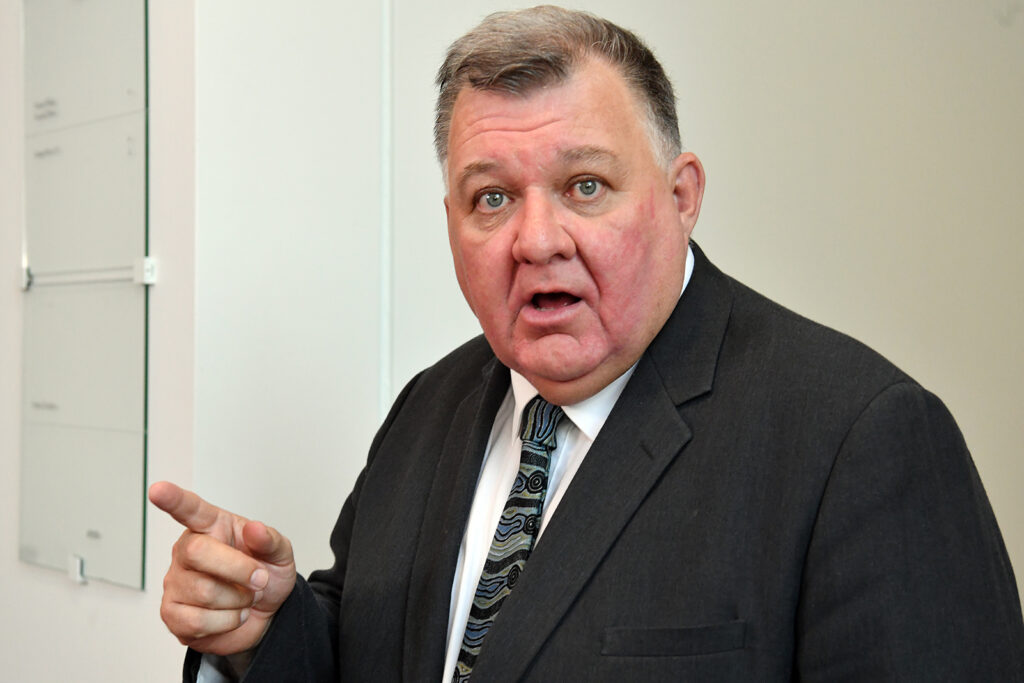 Craig Kelly MP, parliamentary leader of the United Australia Party and former unsuccessful furniture salesman, has been described by others as an idiot. Not by me, though; in Craig, I see greatness.

Freedom fighters always cop that kind of shit anyway; the otherwise totally not racist Winston Churchill used to describe Mahatma Gandhi as a “malignant subversive fanatic”, a criminal and a miscreant. Well, if Churchill can be that badly wrong about Gandhi, we should all perhaps pause to reflect before pouring any more sarcastic scorn on the beleaguered Member for Hughes as he continues his one-man crusade against the pending mass-extermination event otherwise known as the COVID-19 vaccination program.

Craig is, by any measure, magnetic. His public platform used to come partly as a prerequisite of being a member of the Coalition government (courtesy of Scott Morrison’s personal intervention to save him from a preselection loss), but his status as one of Facebook’s most popular conspiracy theorists was all his own work.

Sadly, as a victim of cancel culture (it’s political correctness gone mad, Alan), Craig had been forced to make do with his 12,000 loyal disciples on Telegram, delivering regular startling insights such as the undeniable fact that NSW Chief Health Officer Kerry Chant is “a demonic vax-cultist”.

Fortunately, this travesty of obscurity was not destined to last, as the nation’s most loved cartoon character, Clive Palmer, talent-spotted Craig and elevated him back to prominence as the leader of the richest and least successful political party the country has ever had. Several million spam text messages later and with UAP membership closing in on double figures, nobody could be unaware that the rules of the political game had changed, dramatically.

It’s a political marriage made in 4chan; two formidable liberty warriors joining forces, like Daenarys and Jon Snow before the Battle of Winterfell, facing down the common enemy of “science” armed with nothing more than indomitable self-confidence, Clive’s mining royalties and a jumbo-size bucket of chicken nuggets.

What most of us don’t realise, because we’re sheeple, is that we’re being lied to. Politics is in the thrall of unelected so-called experts, with their fancy PhDs and decades of peer-reviewed research backed by data and the collected human experience of previous global pandemics, just making crazy shit up like “COVID kills” and “vaccines help”.

It’s like that other John Snow, the doctor who discovered the claimed link between cholera and contaminated drinking water, which the entire medical and scientific community still maintains is true 167 years later when it’s bloody obvious from reading Dickens that you can only catch cholera if you’re a 19th Century East End flower-seller. Scientific proof: there are no 19th Century East End flower-sellers around today, and nobody has cholera either. QED, smarty-pants doctors!

Craig is onto it, don’t worry. He’s been shouting it from the rooftops, but people – gulled by our leaders and their sycophantic media enablers – haven’t been listening.

Fortunately, Craig has the means to save us from ourselves, even if most of us think he’s a delusional fuckwit (not me, I see genius). You see, Craig can make laws.

In pursuit of his sacred public trust, Craig recently introduced into Australia’s parliament the exquisitely crafted and attractively named No Requirement for Medical Treatment (Including Experimental Injections) Without Consent (Implementing Article 6 of the Universal Declaration on Bioethics and Human Rights) Bill 2021. Swoon.

The bill, Craig explained to his bemused parliamentary colleagues (virtually; they were all on bathroom breaks while he was speaking), is necessary because Australians are being misled as to the efficacy, risk and safety of the COVID-19 vaccines, and as to the availability of “alternatives” to the vaccines such as Ivermectin.

Further, we are being “coerced, manipulated and/or bullied” into vaccination, threatened with loss of freedoms if we don’t comply, such as our inalienable right to enter Bunnings and drop a sausage in the paint aisle – literally or metaphorically.

It’s not that this is un-Australian (although it is): it’s un-United Nations. Yes, Craig has become a globalist. Sure, some might detect a note of something cognitively dissonant here, given his previous embrace of a prominent seat on the Donald Trump global conspiracy train. That’s a reflection of their own lack of mental agility. Craig is way ahead of us.

The Universal Declaration on Bioethics and Human Rights, to which Australia is a signatory, says in Article 6 that “any preventive, diagnostic and therapeutic medical intervention is only to be carried out with the prior, free and informed consent of the person concerned, based on adequate information.” It’s not part of Australian law, like all the other international treaties and conventions we’re signed up to, but Craig reckons this one should be.

Fair enough, too. Craig’s bill would make it the law that the government (and all its freedom-hating minions) must, “in carrying out its functions, uphold and promote Article 6” and not do anything contrary to it.

Yay. No more compulsory COVID vaccinations! True, there haven’t been any and nobody’s suggested there ever will. And true, this wouldn’t prevent employers from requiring their workers to get vaccinated if they want to keep their jobs, or businesses refusing to allow unvaccinated customers to enter their premises, or the government from issuing vaccine passports and discriminating the crap out of anti-vaxxers. And it sure as shit won’t improve sales of Ivermectin, the drug approved to prevent heartworm in animals.

Actually, Craig’s law won’t achieve anything at all, which I’m guessing is his whole point. What Craig is trying to do, in his super-clever way, is to bring public awareness to the brutal truth: in the face of the global COVID conspiracy, even the power of World Law is helpless to resist.

This battle won’t be won in parliament, Craig is saying. Freedom dies in the dark. Come forth from your bedrooms, defenders of liberty, brandish your Celtic Southern Cross tattoos and “Make Lakemba Great Again” T-shirts, march unmasked in the streets and shout spittle at mounted police.  All you need is a leader, and we have just the man.

Mahatma Kelly. It has a ring to it.