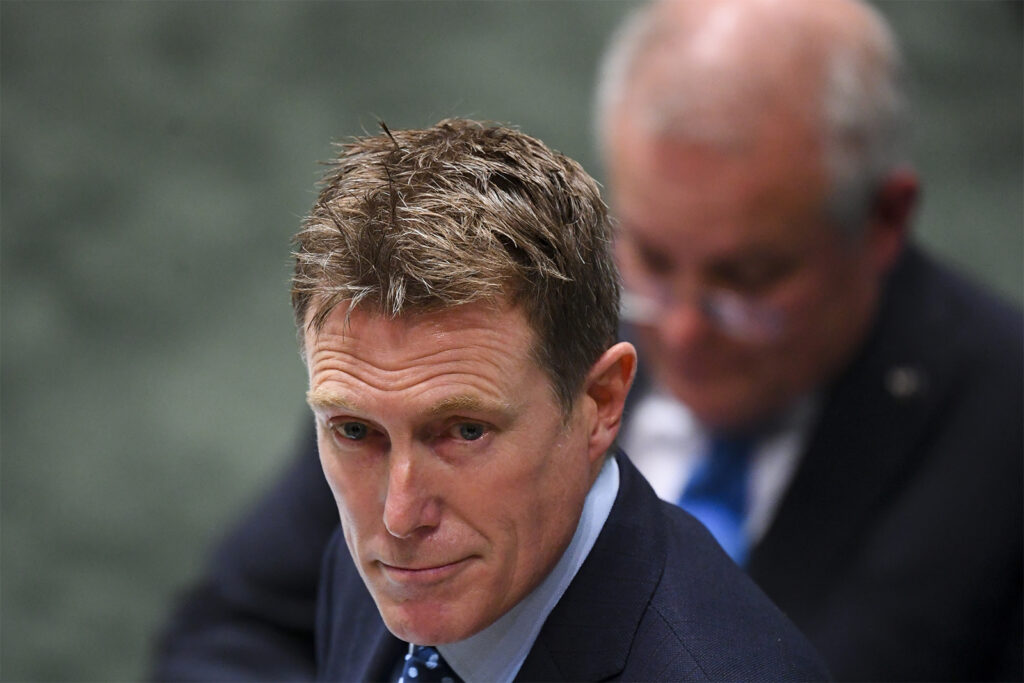 Men and women of Australia, hear me out. I come to explain Christian Porter, not to bury him. The deeds of our leaders are oft overlooked, forgotten amongst their fluctuating favour and the frenzy of our times. Let it not be so with the Honourable Minister for Industry, Science and Technology.

Many have raised questions about Christian Porter’s honour – in the media, in his erstwhile profession, in his acquaintance, in his past – but if such questions were valid, nimbly has he dodged them.

There were sightings of him in public fora, we were told, engaging in acts of strong affection with young women, not his wife, his second, now ex, ensconced in Perth, with toddlers. Witnesses stood by, aghast, as the soon-to-be-AG groped and fondled, risking compromise, as a watching official snapped a photo on a borrowed phone. But loud did Christian Porter shout his denials, on 6PR, in careful statements, and if stories of arm-twisting to expunge evidence echoed latterly through Parliament House and if, after “considering his legal options”, none were taken, what of it? Christian Porter is an honourable man.

There emerged a terrible tale. Of violence, and trauma, and death by suicide. A young woman assaulted, her life destroyed, because, she said with painful eloquence, of her suffering at the hands of Christian Porter. She left behind reams of testimony, grieving friends – her claims’ custodians, your humble scribe included, all ignored. “It did not happen”, said Christian Porter, as he wept before us.  “The Rule of Law”, barked his protector, Scott Morrison, as he ran from us. The matter is at an end, they insisted, with contempt for us, because Christian Porter is an honourable man.

Some who sought to profit from his woes whispered sweet tales into Christian Porter’s receptive ears. The most reputable of lawyers, awards sourced from websites, promised vindication, and litigation was launched with a fanfare that blasted through the polity. From beneath his cloak of victimhood, our hero swore he would voice his truth. Wild conspiracies of animus were ascribed to those who spoke against him, as he stood uncomprehending in the face of actions spurred by loyalty, not base politics. But when he read what the ABC had gathered to support its story, his promised testimony under oath was cast aside, the case abandoned, victory continually asserted, as if repetition gave it heft, or truth. And if he received no apology, nor damages, nor even the removal of the offending story, draw no conclusions from this grievous lack, as Christian Porter is an honourable man.

And if he insisted through the courts the ABC’s compiled defence must be buried, hidden far from human eye, let us not lose our reason as to what the 28 redacted pages of sworn testimony from multiple witnesses may contain, and remember still that Christian Porter is an honourable man.

Alack! There came a Day of Reckoning for our Prince among Men. Not for his alleged crimes, not that, never that, but for the cost of those great legal minds who served him. Despite loose change from the ABC and deep discounts from a barrister whose stark conflict was casually denied until judicially determined, Christian Porter was disinclined, perhaps unable, to pay the bills himself. What a mercy that ransoms from others could the general coffers fill! Into a Blind Trust was tipped vast sums by person or persons unknown, anonymous largesse he would gratefully accept, if not organise, nor solicit.  Behind careful structures of plausible deniability, glistering gold was hidden, with the “potential beneficiary” noting on the Parliamentary Register “in the interests of transparency”, well, nothing at all about his benefactor, nor what they might expect in return.  “I have no access to information about its conduct or its funds”, he stated, implacable as the edifice of Government accountability teetered wildly before him, impervious in the knowledge that he, Christian Porter, is an honourable man.

A Cabinet Minister accepts vast sums from one or more people whose identities he claims not to know, nor care to know, nor care about at all. Despite his public role, he does so in a “purely private capacity” and asserts a blithe conviction that accepting funds without provenance leads to no conflict of interest, not now, not ever.

Judgment is fled to brutish beasts indeed if Christian Porter is said to be an honourable man.

Jo Dyer was a friend of Christian Porter’s accuser, Kate, and earlier this year successfully applied to have his barrister, Sue Chrysanthou, removed from his now discontinued defamation case against the ABC. We make this disclosure “in the interest of transparency and out of an abundance of caution.”