Depressingly for HR reps around the country, the office Christmas party, which should be a fun night for everyone, is like a car crash waiting to happen. A car crash caused by awful, gross individuals who shouldn’t be near a road to begin with, but a car crash nonetheless.

You may have seen that professional fuckwit Chris Smith has been fired from 2GB/Channel 9 and Sky News for his alleged actions at the Sky News Christmas Party. These allegations include inappropriate remarks and ‘touching’ of coworkers.

If you’re thinking, ‘well he lost his job, that’s great, let’s move on’, sadly, we can’t just move on until we unpack all the shit that happened along the way.

When Sky News suspended him they said that they consider the safety of their employees a priority. Which might sound like a decent ‘bare fucking minimum’ stance from NewsCorp, but it’s important to note that like NewsCorp and Channel 9, Smith himself has an extensive history when it comes to workplace sexual assault and harassment allegations.

In 2009, Smith was suspended from 2GB after allegedly groping female colleagues at the Macquarie Radio (now known as Nine Radio) Christmas Party, which he blamed on alcohol and mental illness. A decade prior he reportedly flashed co-workers while working at A Current Affair, as their chief-of-staff. Allegations any decent person would call ‘serious workplace sexual harassment and assault’… or as Channel 9’s Sydney Morning Herald called it a history of “poor behaviour”.

Look, I’ve drunkenly made some mistakes I call ‘poor behaviour’. I once tried to tackle my own fence because I decided I didn’t like the front door. To clarify, I did so with my body, I didn’t ‘Tim Smith’ it or anything. I, like many others, no matter how drunk, haven’t considered doing what either Smith did.

Language matters and to refer to serious allegations the same way a teacher refers to a kid who keeps running inside, is not just ‘poor behaviour’ by his former employer who overlooked multiple allegations, it’s disgusting and gives predators a way to downplay their abusive actions.

This case shows all the beats of everything wrong with how our society treats ‘sexual misconduct’ and the disparities between how men and women are viewed (as well as men and non-binaries) and the difference between how victims and predators are viewed.

In the sick game predators play as they attempt to ruin the lives of others, narrative is their chess board. The more they can control the narrative, twist it, downplay it, the better it is for them and worse for victims.

The most obvious example of this is how the media treats what they deems ‘poor behaviour’ depending on who it is. Like this example from none other than Chris Smith himself: 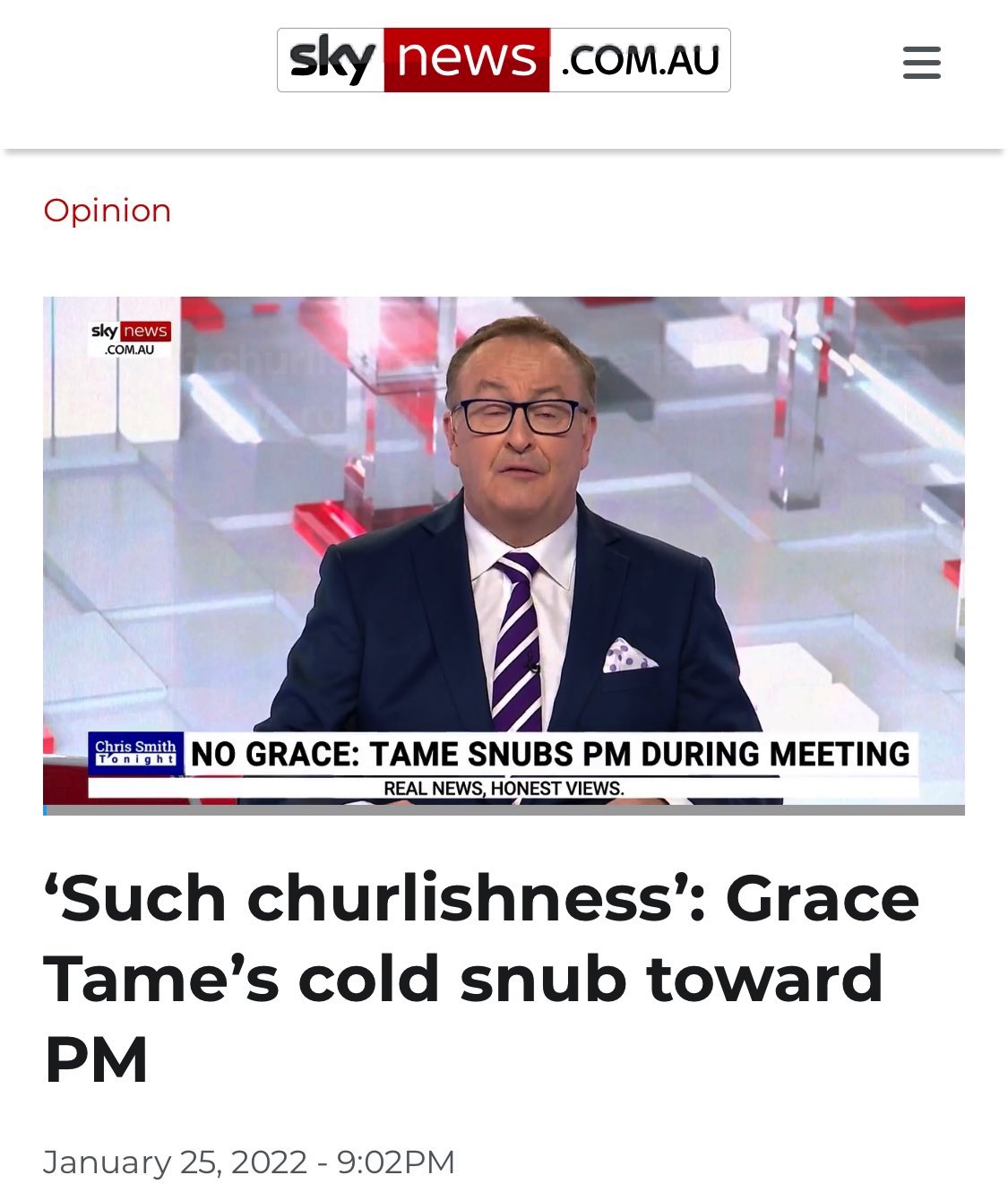 Yep, unsurprisingly he is one of those fuckwits who banded together when Grace Tame dared to not smile for the chief fuckwit.

During the segment, he and his guests slammed Tame for being ‘rude’ and for not answering personal questions a tabloid journalist barked at her while sticking a microphone in her face.

For transparency’s sake, I want to acknowledge that I’ve become close mates with Grace (transparency and also flexing), which if you think makes me too biased to comment, why was Smith with his history talking about someone who advocates against sexual violence?

Similarly, most the coverage of the historic rape allegation against Christian Porter was overseen by his friends who are also loud members of the fuckwit community. All of whom tried to twist the narrative around their friend, while accusing those wanting answers of being biassed.

Another disparity is how sobriety and mental illness is portrayed. We’re told that for victims, mental illness and sobriety apparently reduces credibility, but for perpetrators it makes them more sympathetic and trustworthy.

Amazing how being drunk can be an acceptable excuse for a man's terrible behaviour, but being drunk as a woman is asking for it

‘Taking advantage’ of inebriation to assault someone is dehumanising, disgusting and wrong. That goes for whether you are using it as an excuse for your own behaviour or a way to blame or criticise a victim.

Mental health was mentioned by his now former employer 2GB in their statement on his firing, saying they are providing him support: 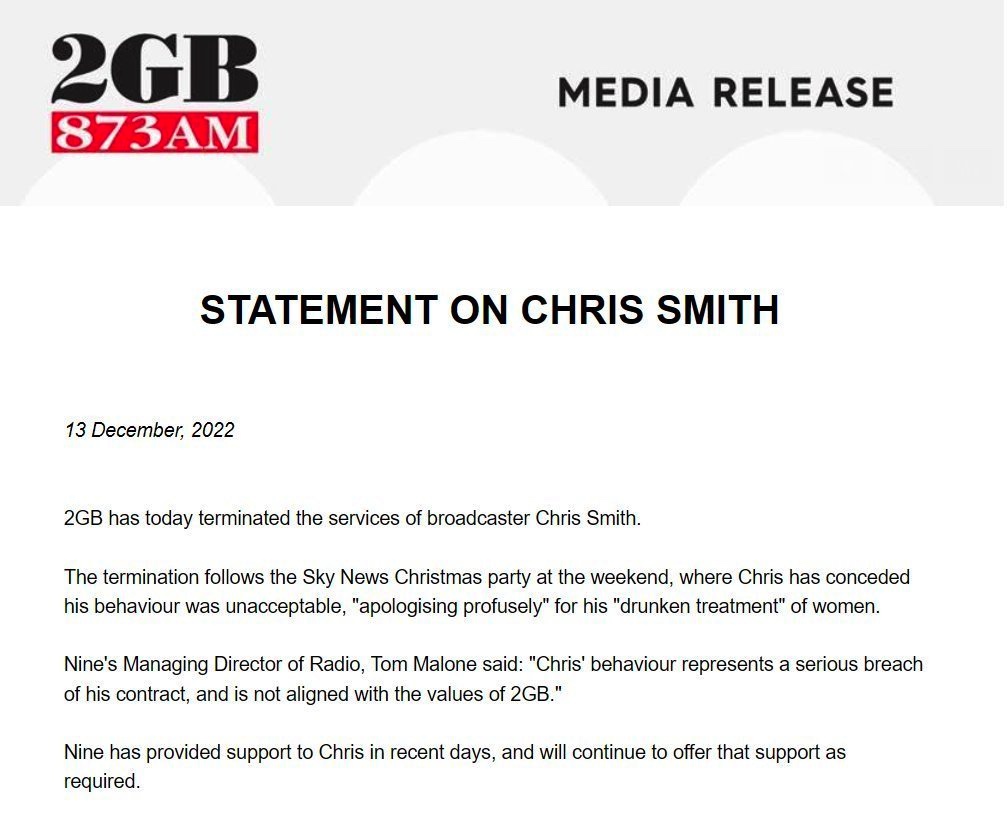 Channel 9 showed concern for the wellbeing of the admitted perpetrator, but where was their concern for their female employees when they brought him back, twice?

One week prior, Channel 9 papers bragged that they wouldn’t be slowed by Brittany Higgins’ lawyers from publishing information reportedly provided by Linda Reynolds ‘exposing’ Higgins’ lawsuit, while Higgins was in hospital due to mental health concerns.

Multiple alleged or proven victims (including Higgins) have had their private records leaked by the media to weaponize their mental health, or had pics ‘unearthed’ to imply a lack of sobriety even if they’ve just sat near a “large BONG”. A stark contrast in sympathy shown.

These constant narrative manipulations come at a societal cost, especially when paired with our broken ‘justice system’.

Recently, a WA man plead guilty to sexual assault and was shown ‘mercy’ by the judge, avoiding jail time because he has developed mental health issues, was drinking, is ‘remorseful’ and ‘is young’ meaning potential long term issues.

How does that saying go again? ‘Don’t do the crime if you can’t do the time, cunt!’

Regarding the far too common ‘he is young’ excuse; the man is 26, he’s older than I am. He’s the same age Grace Tame was last year while she led national discussions regarding sexual abuse. Adults are definitely old enough to not sexually assault someone and to be held responsible for their actions.

All the judge’s reasons to show ‘mercy’ apply to the victim, who is actually the one who deserves sympathy and justice.

These narratives and excuses come in a cycle, one we need to break. We need to stop these attempts to pull a sheet over our eyes, kick ‘em in the balls and throw the sheet away for good.

As a writer, one of the pieces I’m most proud of is an article for The Chaser from last year, responding to the faux-confusion at the core of this cycle, an article I hope one day won’t be relevant: 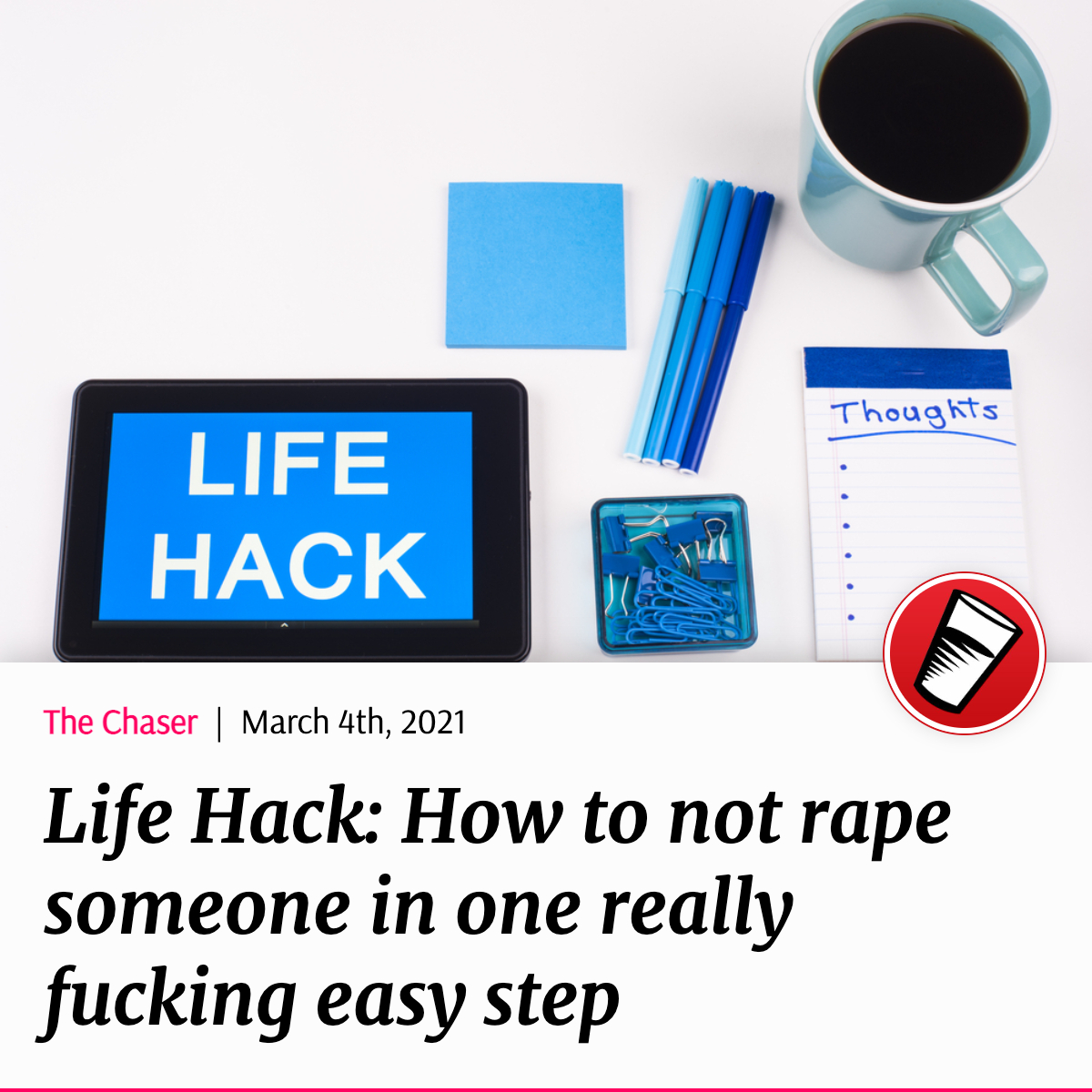 (In hindsight I probably should’ve pitched the article to The Shot, but still.)

Australia, when do disabled people get a ‘fair go’?
Help us bring you the good news
Our writers can't be paid in exposure, but they sure can die from it. So if you like the stories on The Shot and would like to become a supporter, we'd welcome the money. Just $1 a month is enough for us to keep publishing stories.
Support The Shot
Sick of this notice? Click here to never see this bar again.
Do NOT follow this link or you will be banned from the site!