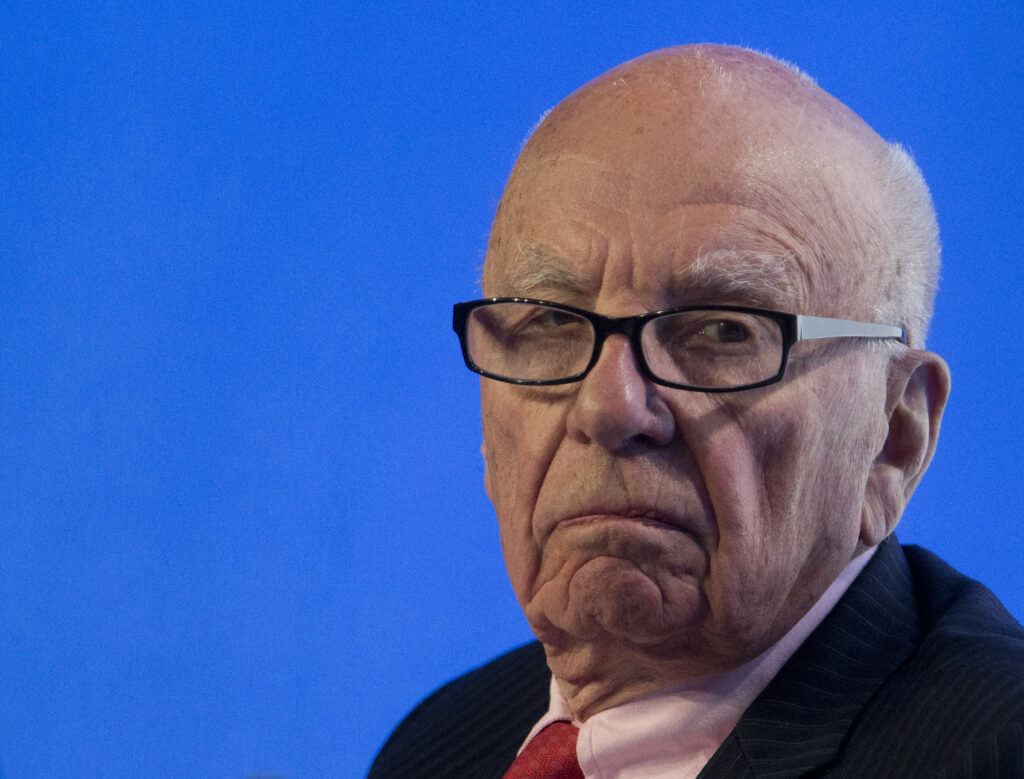 When politicians squirm under the flaky focus of the public spotlight, much of Australia’s mainstream media willingly dresses the stage and provides the soundtrack for a more flattering narrative. Mauled minds eventually give way under the onslaught of reframing and spin, and fading memories, the vague knowledge that it wasn’t always like this – that we were asked to care about different things only a moment ago – collapse. The great forgetting project conquers all it needs to, and Scott Morrison is better at conducting this symphony than he is at anything else.

From the pandemic, to the climate crisis, to the war in Afghanistan, to the waning popularity of Australia’s least interested Prime Minister, these past weeks have seen discussions pivoted in conservative media so dramatically the brazenness is almost impressive.

The war in Afghanistan lasted two decades. At least 71,000 Afghan and Pakistani civilians were killed. Despite the US spending $2 trillion on the war and losing 3590 military lives, it ended largely where it began: the Taliban in power and cynical Western politicians trying to play the superhero, media fanning their capes and stuffing their jocks.

As Scott Morrison was condemned quite justifiably for Australia’s pitiful efforts to save lives on its exit from Afghanistan, the most recent site of Australian war crimes, Rupert Murdoch’s The Daily Telegraph trotted out the action man with the soft beating heart for the downtrodden. 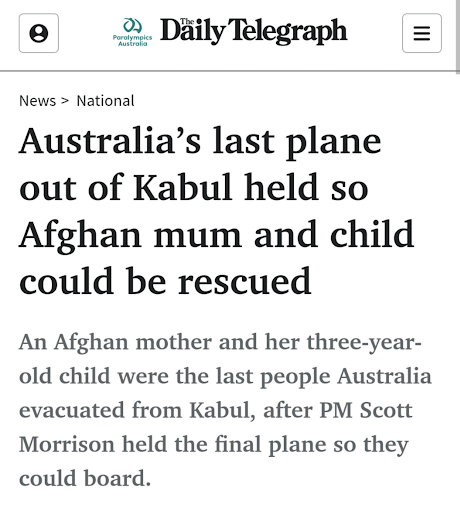 At the risk of sounding cynical, this did not happen. Not only is no one quoted in this story and the ever-full-of-shit Prime Minister’s Office is clearly the source of this information, it also makes very little sense: chaos erupting, the Taliban closing in on Kabul airport, scrambling soldiers waiting for personal clearance from Scott Morrison, a man who is not the “Commander in Chief” of Australian military operations but who has clearly seen a bunch of American movies beyond The Croods – a Prime Minister packing a notoriously shitty track record on women and refugees and even picking up the phone – personally holding back the last flight out so an Afghan mother and child could be flown to safety, because he so clearly cares deeply about this sort of thing.

“The Saturday Telegraph understands,” the paper wrote – stretching the definition of “understands” – that “Mr Morrison asked the plane to stay on the ground at Hamid Karzai International Airport for a few more minutes to give officials time to scour the tarmac for her and the child. Once the mother and child were located and loaded onto the plane, Mr Morrison gave the clearance for wheels up, and the flight left Afghanistan. Within hours of Australia’s departure, two bombs detonated near the airport, killing at least 103 people, including 13 US military personnel.”

That Morrison’s involvement is beyond the realms of the plausible does not really matter. The military and national security are the surest ways to ensure embarrassing FOIs never emerge to contradict this.

The image and the headline is all that will last, the rest will be lost in the fuzz. Australia accepted a piddly 3000 refugees and Peter Dutton even took that opportunity to warn us that there totes probably might be terrorists in that allotment. But this one woman, her child, the image of both, and their heroic saviour, will linger longer than any of these details. Morrison, compassionate and competent, two traits not obviously in abundant supply, are the engineered remains  as glimpsed via the warped lens of The Daily Telegraph, the Rugby League edition of The Herald Sun. And the right amount of this sort of thing is all it takes sometimes.

On the climate crisis, NewsCorp, the media arm of the Liberal Party, orthodoxy propaganda for the rich and powerful, “announced” this week that it would move away from its decades-long campaign of outright climate denialism and would instead shift to stalling progress in ways that seem more reasonable on the surface than this sort of thing. 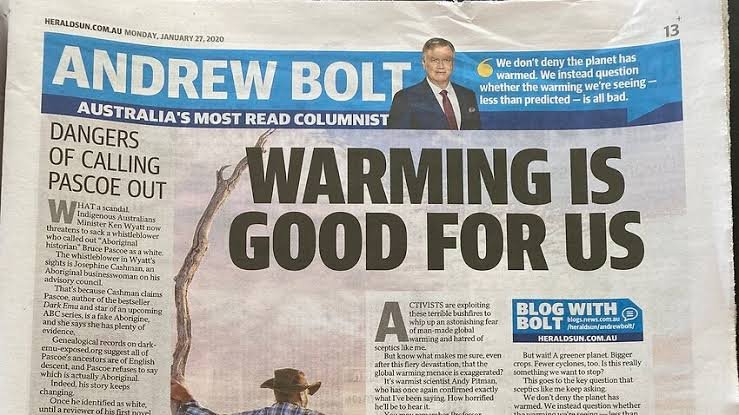 Which will, in reality, almost certainly just amount to more of this sort of thing. 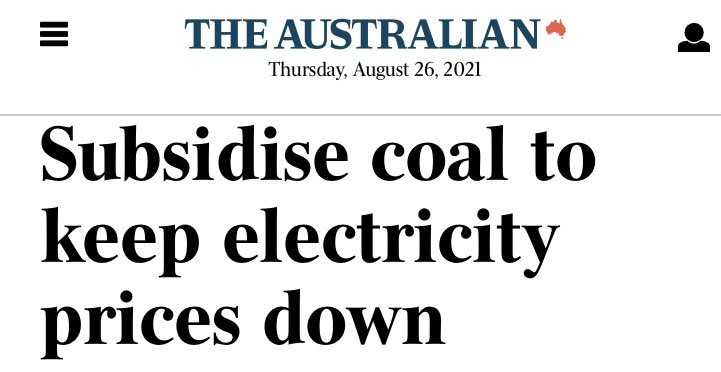 The “news” of News’ editorial pivot was “leaked” to NineFax newspapers because it, of course, could not be announced directly in NewsCorp papers. The admission that yes, The Herald Sun, Sky News, The Tele, etc., had paved the way for Australia’s unrelenting climate crimes for 30 fucking years with reams of unscientific shite would be too strong a dose of reality for the people that like to parrot and spread the stupid things said inside these stupid newspapers.

And if you’re not yet convinced about NewsCorp’s good intentions, Joe Hildebrand, a columnist whose answer to every problem in the entire world is “can everyone please stop yelling”, will headline the pivot. Just wonderful stuff. 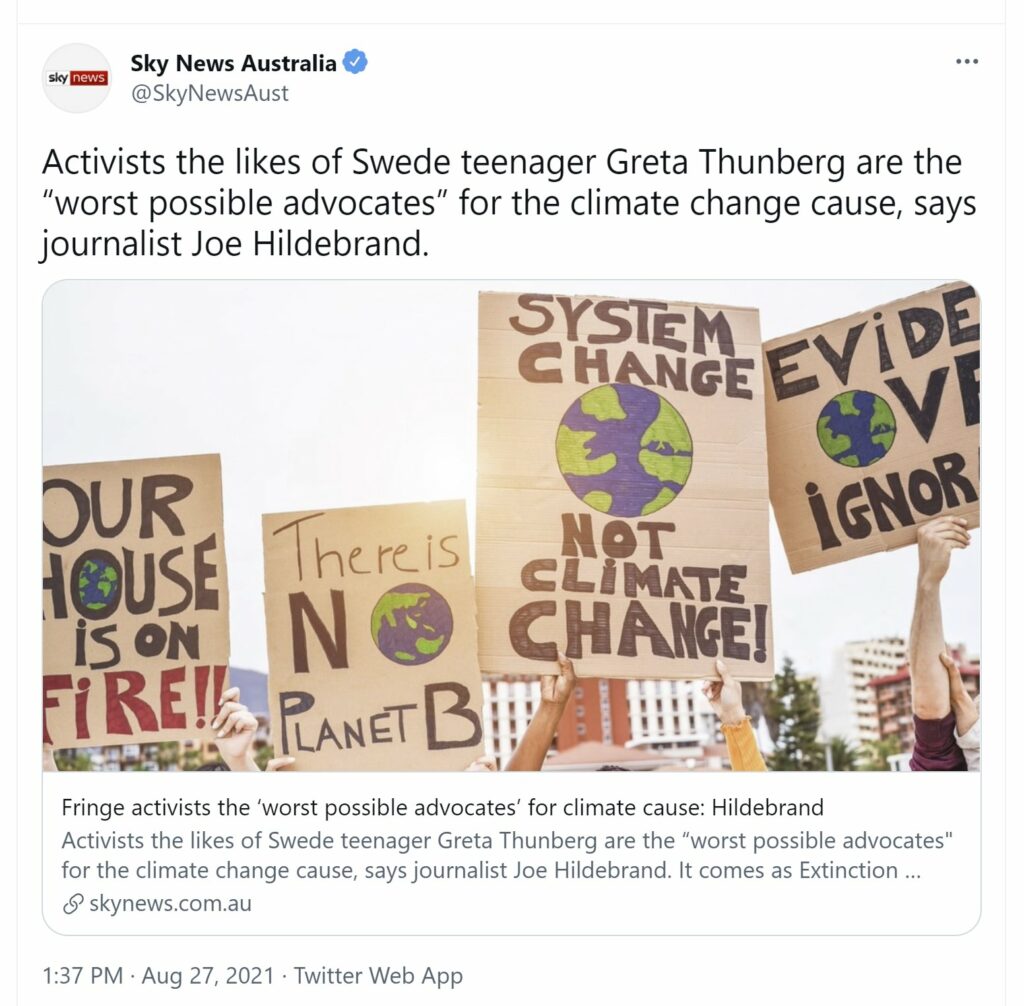 As Ketan Joshi points out in detail in Renew Economy, climate denial takes many forms in 2021: outright rejection of the science is less viable now that the world is quite often on fire and flooded to obviously new, entirely predicted degrees. The conservative angle coal oligarchs prefer now is to delay as much as possible serious action while the pilfering continues during the remains of their mortal lifespans: 2050 targets not the more immediate action the world needs, slower and “more realistic and reasonable” transitions to clean energy, et fucking cetera. This is what NewsCorp will back.

One day, if the world manages to remember, News Corporation’s contributions to the climate crisis will be considered a betrayal of our species and our planet. This pivot is about making sure the world doesn’t remember.

And on the pandemic front, the grand political narrative shift underway is that Australian deaths are no longer entirely “Dictator Dan’s” fault, they are now “inevitable”. The first part of this equation was never true – 655 of Victoria’s 823 deaths in 2020 occurred in Federally managed aged care centres, and the hotel quarantine leak that began the second wave, now, after 40-ish such occurrences, is quite obviously a feature of hotel quarantine itself not imaginary Communist dictatorships. And the second part, the “inevitable” clause, did not need to be hurried along prematurely quite so enthusiastically and carelessly. It was more avoidable than this.

The Delta strain being staggeringly contagious and the arrival of vaccines – however slowly and ineptly – has shifted the landscape of the pandemic. This is undeniable. But self-interest and party loyalty casting this deep a shadow over the nation’s media, politics, and by extension our public health response, is disturbing. In hindsight I don’t know why so many of us expected better. 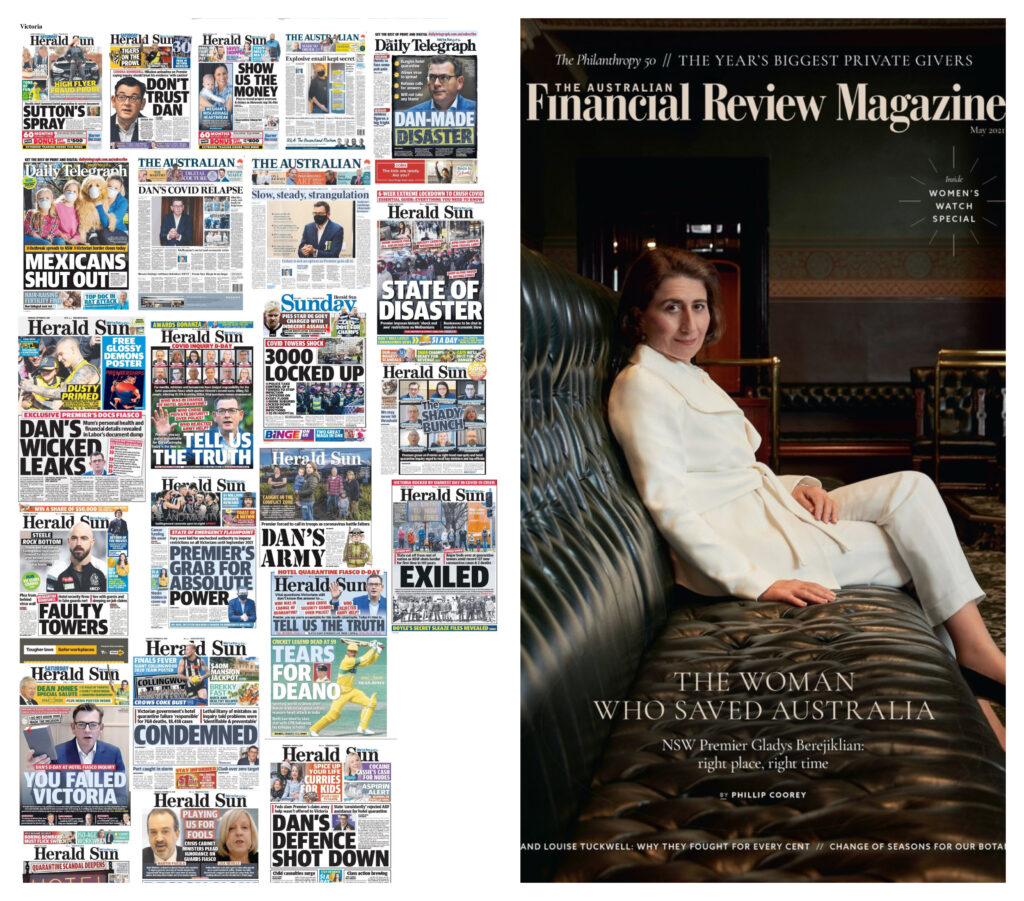 Countless Australians are alive today because of the sacrifices of ordinary people and various states’ commitment to life, collective safety, and to eradicating coronavirus out of existence – even when they had to pretend they weren’t doing that. But it does not matter, again, because the monolith is moving as quickly as the Delta variant.

Where once new coronavirus case numbers fell in-sync with the easing of restrictions, they now peak alongside proposed picnics. “Freedom” has become the go-to answer to serious questions about life and death; “pre-existing condition” has become code for mortalities we are asked to collectively value less; the elderly have been described as having “age issues”; “Death is horrible, but” and “you’ll be able to go to funerals again” the sorts of things uttered by the architects of this particular pandemic period: Gladys Berejiklian, a disturbingly gleeful and shitty neighbour, and Scott Morrison, the nation’s most prolific coiner of slogans that feel criminally stupid mere moments after they’ve been uttered.

Blame is shifting to the sick and the vulnerable, not the disease, and certainly not the relevant failings of the powerful to protect us from it – which we are now unequivocally being asked to care about less. Arriving with it all: the expanded social licence to give less of a shit.

As NSW and Victoria enter this next phase of the pandemic, one state oddly enthusiastically about it, the other dragged along mourning what it previously won at great cost multiple times – a Covid-zero existence: Covid being bad, zero of it being pretty fucking good – we learnt via The Saturday Paper that hospitalisation rates are up to three times higher than reported. We learnt that Health Minister Greg Hunt did, in fact, as was pretty bloody obvious last month, tell Pfizer to piss off, a key reason the nation is not vaccinated enough to avoid its current fate. And we also learnt, on the morning NSW Health tweeted “ROADMAP TO FREEDOM UNVEILED FOR THE FULLY VACCINATED” in a tone-deaf deranged all-caps, that Dr Kerry Chant advised the state’s leadership to reopen at closer to 85% vaccine coverage, not 70%, because of all the likely, you know, avoidable death.

Labor states are being attacked relentlessly for keeping borders shut, while Liberal states with closed borders are quietly hoping no one continues to notice. NSW has been funnelled disproportionately more vaccine than was publicly disclosed and agreed to, and is relentlessly crowing about the fact they’ve somehow administered more vaccine. “I signed up to a national plan to vaccinate our nation, not a national plan to vaccinate Sydney,” said Daniel Andrews, Premier of Victoria, clearly thrilled to bits about it all. “Some don’t like to see this as a race, but a race it surely is. What I didn’t know was that Premier Berejiklian is in a sprint, while the rest of us are supposed to do some sort of egg and spoon thing.” If Scott Morrison is not the “Prime Minister for NSW” he’s going about conveying this in a strange way.

Australia, as glimpsed on the nightly news, is a country almost entirely composed of disgruntled cafe and gym owners; the doctors and nurses at the heart of our soon-to-be-overwhelmed hospitals are less a part of the public consciousness than our frustrated footballers and struggling hairdressers. We are being asked to look elsewhere, and look elsewhere we will.

A federal election is looming. It will not be fought between an uninspiring, insipid Anthony Albanese and a negligent, morally bankrupt Scott Morrison – the Prime Minister who palmed off his constitutional responsibilities for quarantine to the states, saw the nation rollout the OECD’s slowest vaccine drive, covered up an alleged rape inside Parliament House, surfed Hawaii during the bushfires, and cynically and callously berated and abandoned Victoria during its darkest days. It will be contested between the Prime Minister that won back freedom, the economy, and prosperity, and an Opposition Leader defined almost entirely by whatever scare campaign Rupert Murdoch and his ilk deem most effective against the Labor Party.

Remembering is all we have in the face of such an onslaught. That is why they want us to forget.

Scott Morrison: not with a bang, but a whimper

Scott Morrison wants to pretend nothing has changed when everything has

Morrison’s vision is not about technology, nor taxes. Just lots and lots of gaslighting.

NAB force Facebook to pull Chaser post mocking their coal investments
Help us bring you the good news
Our writers can't be paid in exposure, but they sure can die from it. So if you like the stories on The Shot and would like to become a supporter, we'd welcome the money. Just $1 a month is enough for us to keep publishing stories.
Support The Shot
Already a supporter? Click here to never see this again!
Do NOT follow this link or you will be banned from the site!