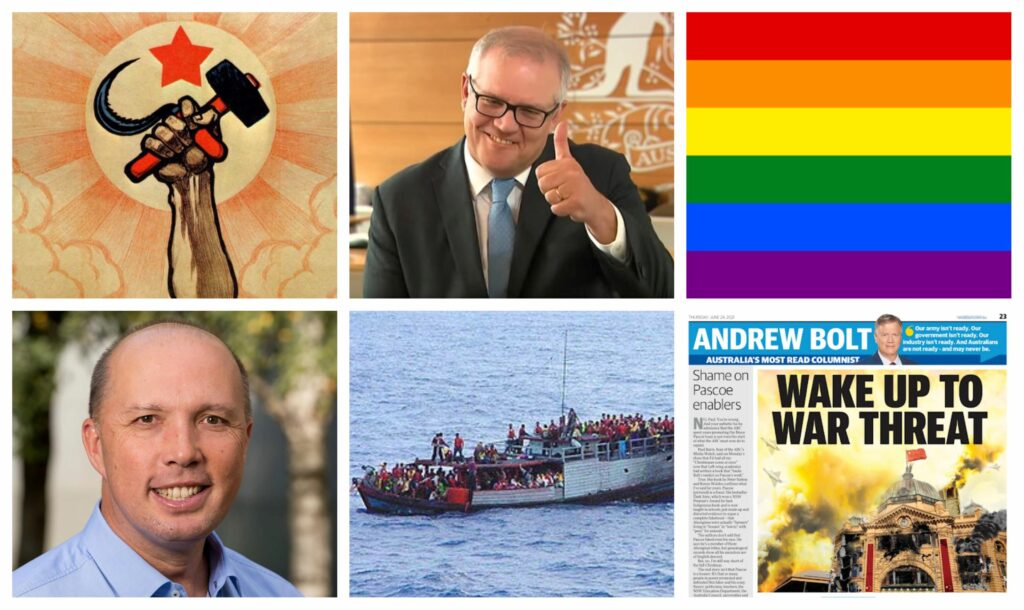 Australia chokes on established truths that contain little truth; a foundational bedrock of bullshit permanently nestled beneath the sand and the surf. Stunted national discussions habitually frame the possible, sensible and humane as impossible, nonsensical and weak. This has persisted for so long now, and is reinforced with such complicit media vigour, that the narratives we tell ourselves about ourselves have crossed the realm from lies into myth.

Lies are of the present, of the news cycle, of the now. They can endure for years if they’re well constructed and important enough, but at a certain point they become mythical, and at that point that are infinitely more powerful. Because myths exist divorced from time. They ripple across generations. Even millennia if they stir the soul and speak of the human condition, or what being alive feels like – The Illiad, King Arthur, heroes and villains, religious texts like the Bible and Star Wars. Myths are a squall on a temporal sea, fucking with the waves, shaping the past, the present, and, as each election rolls around, the future.

Albanese is a communist. lIbErAlS aRe BeTtEr EcOnOmIc MaNaGeRs. The Labor Party is less cruel to refugees. We are compassionate, responsible global citizens above reproach, not corrupt, moral and fair. There was no genocide when Europeans arrived here. Allowing money to concentrate in the hands of the wealthy benefits us all. Coal can be clean. Voting 1 for minor parties or independents in a preferential voting system benefits the major party you don’t like. Minority governments don’t work. The bush is pure; the city elitist and latte sipping. Mateship and the fair go. Ned Kelly larrikins, chill as fuck. Young people can’t afford houses because of avocados, not an exponential increase in prices compared to wages. “Flexibility” is better than annual leave and job security. Have a go to get a go. Refugees are terrorists. If minorities could just shut up about everything, we’d all be fine. Et fucking cetera.

All of this is accepted by a staggering proportion of the population, and all of it is unambiguous nonsense, passed down for decades, absorbed without choice or conscious awareness, like genes, like blood. This is a mythical land, delusion its intellectual currency: awash with myth, justified by myth, shaped by myth.

Without a realistic sense of self, of history, of identity, how can any of us accurately perceive real threats from imagined ones? Uncertainty, even unconscious uncertainty, is where fear festers. There are many buttons fear can push in the collective hivemind, and the Morrison Government is an administration with many slimy fingers, groping around in the dark for the ones that stick. The spittle of scare campaigns gushing from its gaping maw over the last few weeks are only consistent in their relentlessness.

Trans people. Indigenous peoples. China. Unions. War. Taxes. Energy prices. Refugees. Manchurian candidates. Secret Communists in the Labor Party. An erosion of manners and civility. Grace Tame’s bong. The Morrison Government knows it is on the ropes, knows it cannot rely on its record alone – because it sucks – and knows that fear is a useful tool to galvanise support regardless of a sucky legacy – which it has.

This is not a new political strategy. In 2001, John Howard, the Liberal Party’s patron saint of rat cunning, made an artform of fear with the Children Overboard incident. Using the “crop” function in Photoshop and our innate desire for safety from the unknown, he convinced enough voters that refugees were such awful people they would throw their kids into the ocean to save their own skin. Though disproven later, it remains in the national unconscious, mythic in its sway, moral decay lingering. We still lock up refugees indefinitely, a cruel reality easier to swallow and ignore if maybe, just maybe, they’re the types to hurl children into the sea. Retractions never hold as much emotional sway as the initial lie.

At a basic level, fear campaigns are effective because they cause us to seek stability and safety, and little in life is scarier than change. It is a tactic that preys on emotion rather than logic – logic being difficult in illogical times – a politically expedient approach for a government as unimpressive and ineffectual as this one.

Though polls are in a nose dive now, do not be shocked if this starts working as war in the Ukraine intensifies, and as government spin and media lapdogs find their focus and unite voices, zeroing in the right buttons for those slimy fingers. This is the specialty of the Murdochracy – an unofficial but obvious coalition of the Coalition and the Murdoch press – like this staggering example from Melbourne’s noxious gas leak, The Herald Sun, from the middle of last year. 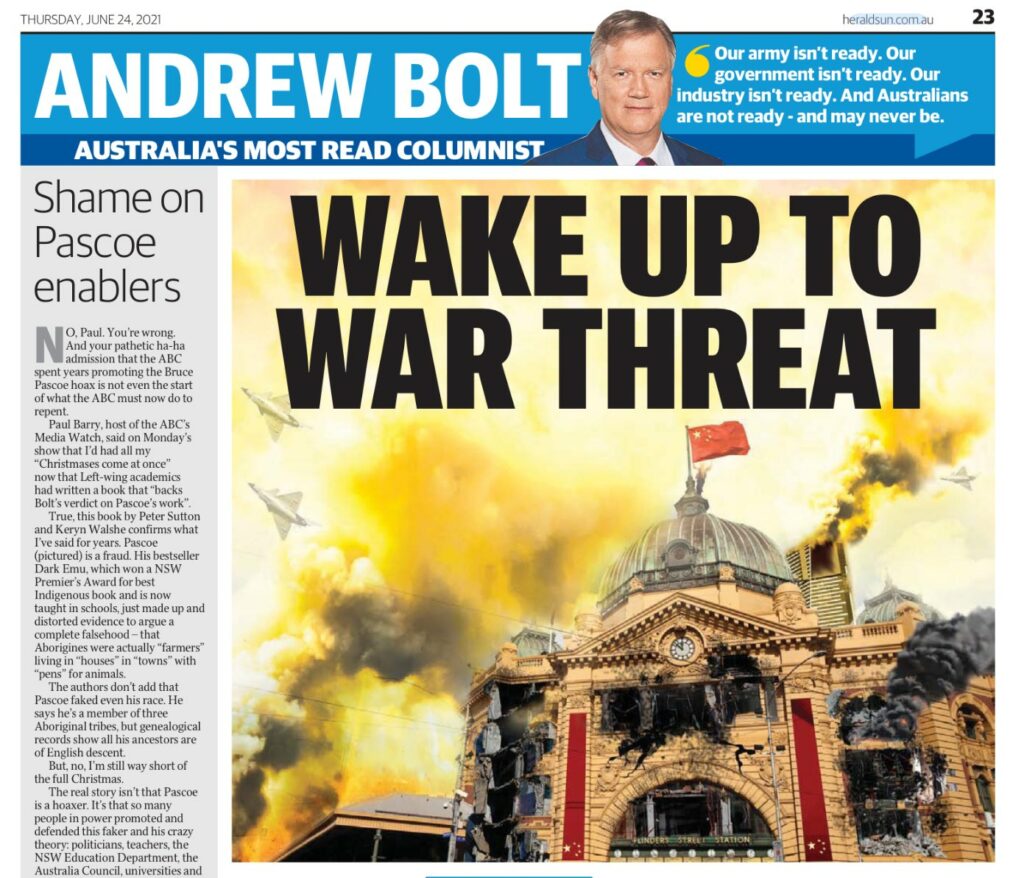 The Liberal Party’s anxiety avalanche tells us clearly that this election campaign is going to reallllllllllly fucking suck for anyone who gives half a shit and is emotionally impacted by the world around them. Because when you can’t unite around a hopeful vision, dividing against someone, anyone else, is just as effective. This is their remaining path to victory.

Two Mondays ago, on the 14th anniversary of Australia’s apology to the Stolen Generations, Morrison, a man incapable of understanding much on a level deeper than self-interest, implied Australia’s Indigenous peoples haven’t taken the whole being colonised thing very well.

“Sorry is not the hardest word to say. The hardest is ‘I forgive you.'”

The underlying message of this piece of casual settler-colony victim-blaming is that the colonised are not showing much grace. That they could be bigger about it. Maybe even more polite about it. It is a dog-whistle to racist and casually racist Australia; a renewed target for voters and their frustrations. Weaponising an “other” to blame for the unpleasant noises and feelings. There isn’t really a problem if they could just get over it. Let’s all just move along.

This lie sits upon the myth of peaceful settlement, of terra nullius, of no genocide – all disproven, but all still lingering in the nation’s bloodstream. Denial and fear are two sides of the same coin.

This election campaign will be relentless and cruel, stupid and depraved, infuriating and harrowing. The confused people still in your lives will spout confused nonsense, just as they did when Howard weaponised xenophobia and othering. Steel yourself against this shit. If you feel hatred bubbling for the political classes now, just give it a month or two – you’ll be a fully fledged Sith by election day.

This Russian roulette of fear tells us also that this government is devoid of empathy and compassion for the people of Australia it claims to serve. Not just minorities and foreigners – it doesn’t even pretend to serve those – but even rich, stupid, uninterested white Australians i.e. the Liberal Party base. For while the direct targets of these fear campaigns are dealt the most harm, they are not the only victims of it: all of us are.

Millions of Aussies are in the worst mental health states of our lives. We are stressed, confused, shattered, traumatised, broken by all we have endured across the climate-fire/pandemic/late-capitalism era of recent existence. Life has sucked, been harder than we are accustomed, for such a long time now it’s hard to remember the preceding less sucky epoch. Brains are foggy; nervous systems are jammed in fight/flight mode. Ordinary people are wallowing in pasts now swallowed, disconnected and disconcerted, devoting dwindling energy reserves into feeling just ok enough to keep on going.

Stoking anxiety for political gain is politics as usual, but politics as usual is capable of immense harm, particularly now as we learn to live again through these unusual times. In this environment, deliberately inflicting more fear, more anxiety, and more stress on millions of people is callous and cruel. It is depraved, fucked up, self-interested – the sort of thing only a psychopathic shitheel would do. “Unnamed cabinet minister” had it right with Morrison.

Time and time again over the course of the pandemic I have hoped in vain for politicians to act with the class and compassion of the people they fail on a daily basis. I don’t know why I’m still disappointed when they don’t. It is beyond them. It is systemic. It is a rot at the core of all power systems. The hypocrisy galls. The Liberal Party, particularly the stunted chode of the Victorian branch, but all of them, campaigned endlessly about “the shadow pandemic” – the mental health crisis engulfing Australia – when it was convenient ammunition against Labor state governments and their attempts to keep people alive as coronavirus sought to do the opposite. That the Morrison doesn’t mind amplifying already atomic-level anxiety in order to retain power tells us his true quality.

Across human history there is no force more powerful for change, or stasis, than the stories we tell ourselves, and Australia’s are divorced from reality. Our tales paper over rot and decay. They are paint on asbestos, Polyfilla in a moral chasm. They are why things are allowed to stay the way they are.