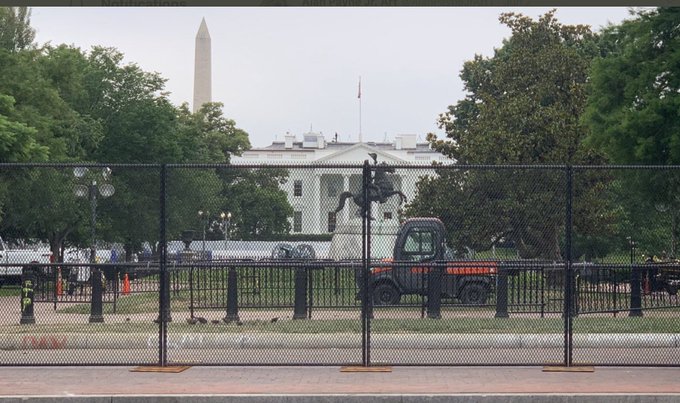 No one is allowed to accuse Aaron Sorkin of heavy-handed symbolism ever again.

Besieged by anti-racism protestors sparked by the police killing of George Floyd, embarrassed by being ushered into a bunker by the Secret Service, and apparently reticent to continue tear gassing US citizens for bible-waving photo-ops, a “seven to nine foot” wall has been erected around the White House.

“I will build a great wall, and nobody builds walls better than me, ”  Trump has said over and over, or some garbled variation of similar words.

Since the very beginning of Trump’s arrival on the political stage, “build the wall” became a xenophobic catch-cry, a cornerstone of his dog-whistling to an increasingly terrified, increasingly angry base.

More fencing going up around the White House complex early this morning pic.twitter.com/VLBRnx1lgz

In related on-the-nose symbolism news, the world’s largest free-standing American flag was this week destroyed by the fucking wind.