General News
Melbourne should fuck Murdoch off out of town
May 21, 2021 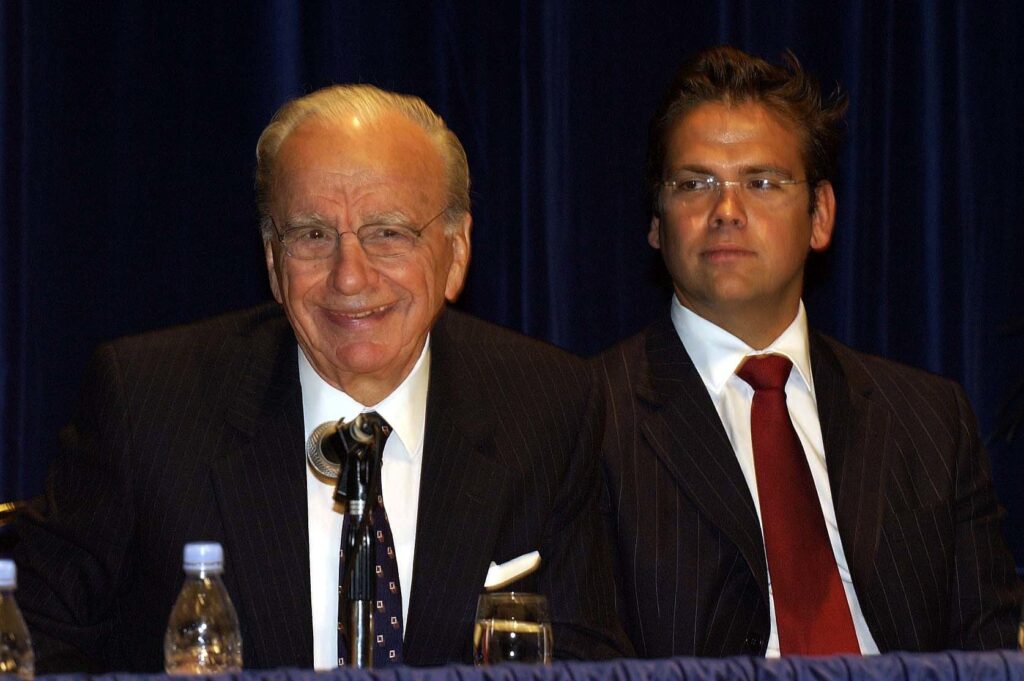 The brains of ordinary people have endured a post-truth battering for many years now: the assault on stable reality that was the Trump Presidency and its thus far consequence-free failed seditious coup climax; the ongoing misery of the coronavirus pandemic and much of humanity’s decision to handle it in a homicidal manner; the suicidal death throes of flailing empire that is Brexit; and the Morrison Government’s largely pointless, surprisingly cum-stained stay in Australia’s Parliament House.

It’s a uniquely terrible time to be a person that gives half a shit about anything. This past week alone, new depths were plumbed.

Israel, a nation forcibly removing Palestinians out of the Sheikh Jarrah district of East Jerusalem – continuing a decades-long pattern of doing this to basically all the districts – has killed 227 people in air raids, 64 of them children, since May 10. 12 Israelis have been killed by Palestinian rockets. During this conflict, Israel’s twitter account, enthusiastically filling the existential horror content void left in the wake of Trump’s exile, was tweeting stuff like this.

Back home, under the cover of bread and circus that is the federal budget, Australia quietly made locking up asylum seekers indefinitely legal. “Indefinitely” as in “potentially forever”. This received bipartisan support from a cruel Government and a cowardly opposition.

A gas-fired power plant the market doesn’t even want to build, situated across two important Hunter Valley federal seats, was shovelled $600 million of tax-payer money on the same day the International Energy Agency released its roadmap for a fossil fuel-free future – a distinctively Australian approach to helping out with the global climate crisis.

And our vaccine rollout continues to flounder, now roughly 6% of the way through the job. Our twin strategy of sowing disproportionate doubt in the AstraZeneca vaccine through inept messaging and not securing enough of ANY type of vaccine is not yet paying off in terms of a reasonably inoculated population. Weird.

A staggering proportion of all this – the avoidable and predictable disasters, the stupidity and shortsightedness, the horrors and the cruelty, and the instilled sociopathy that paves the way for all of it – is cheer-led into existence by Rupert Fucking Murdoch and his conservative social engineering empire, News Corporation.

Kevin Rudd, former ALP Prime Minister, might be an angry little weirdo, and a hypocrite, and one of the strangest social media influencers on the planet, but he is also extremely right about all of this. And in the grand scheme, if you value democracy, none of the other marks against his character matter in the slightest here. In fact, the hypocrisy part proves the main point. Malcolm Turnbull, former LNP Prime Minister, equally hypocritical in his own willingness to ride the NewsCorp tiger while it was advantageous (though admittedly less angry and weird and influencer-y about it all), is likewise correct.

What Australians deem acceptable – ELECTORALLY POPULAR EVEN – is crafted with precision by the outsized oligarchical influence of Rupert Murdoch. His empire wields 59% of Australia’s metro and national print readership, and Sky News spreads its brain rot around the interwebs to its 1.63 million YouTube subscribers. This is currently Australia’s largest news channel on the platform.

It is a simple equation. Beyond a certain point, one which Australia has long since crossed, the more Murdoch you have, the less democracy you also have. And we have more Murdoch than anywhere.

We should choose democracy.

Budget week. Budget week is an annual opportunity for the Murdoch monolith to suck in exciting, budget-week specific ways. It is tradition, and rabid frothing drooling conservatives love nothing more than tradition. (And fucking up everything.) As a consequence, budget week is also an opportunity for ordinary people to experience exciting, budget-week specific forms of depression. No one is trollier than NewsCorp during budget week.

Melbourne’s Murdochbloid, The Herald Sun, chose to depict this year’s budget as free beer, except the free beer is made of money. 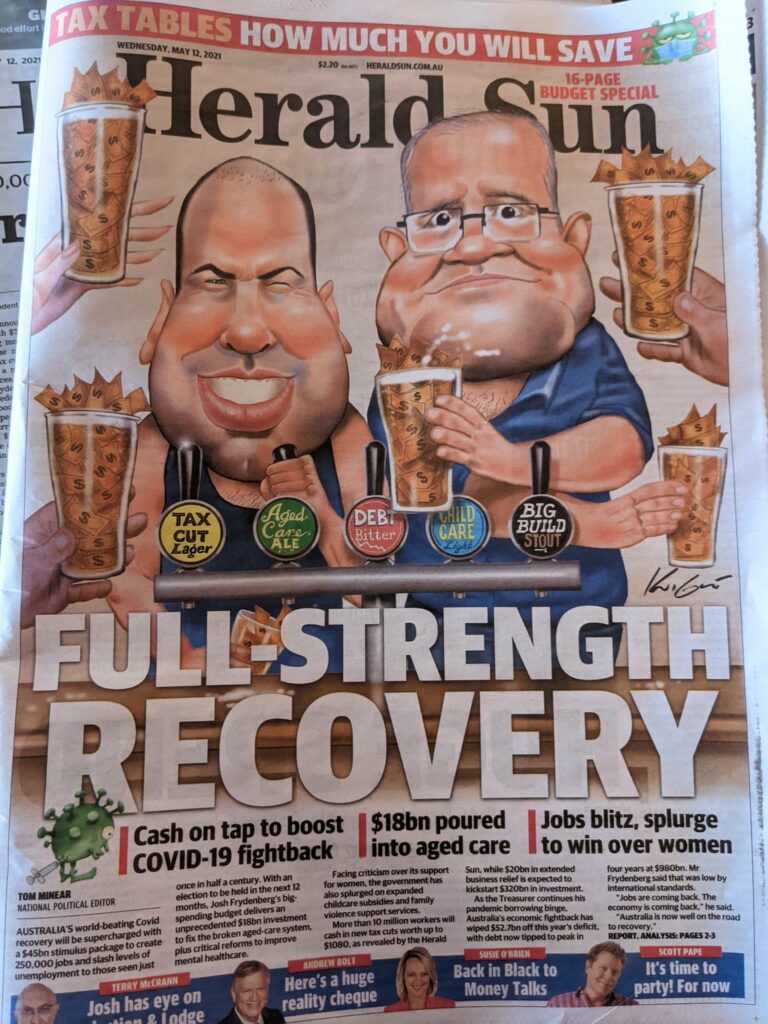 Better than splurging on a desk. Pointing out the cynicism and token nature of the spend on women feels like an own-goal on the part of the Liberal Party’s unofficial newsletter.

On what is usually the sports pages, Josh Frydenberg appeared again, but this time, you know, sporty. Speedy and lycra-clad is a baffling way to depict any member of a Government currently rolling out the 91st most efficient vaccine drive in the world, but the truth of the impression wafting off these pages has never mattered in the slightest, and does so even less nowadays.

Over at The Australian – a large, boring, bloodthirsty rag I increasingly suspect is edited by psychopaths – the big boy serious newspaper went with “Super Spender Event”. 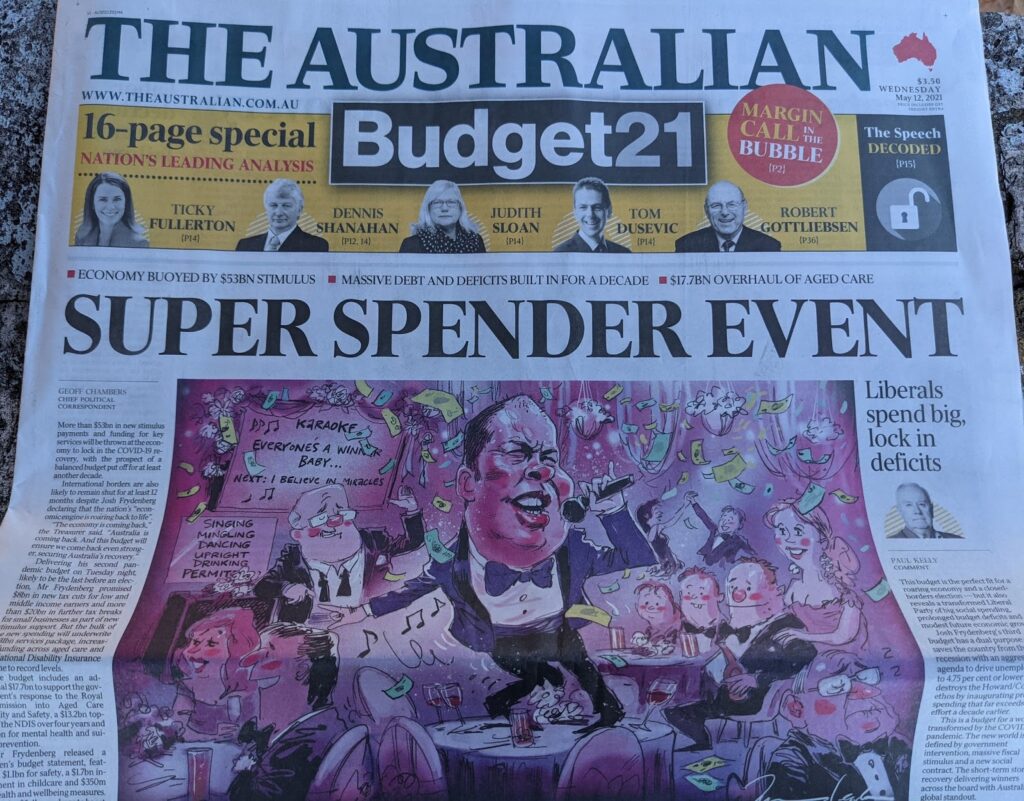 Tuxedo Party Josh has been deployed for the readers of The Oz, a demographic more receptive to rich people shindigs than singlets, chest hair, and free tap beer made of fucking money.

“Everyone’s a winner baby” and “I believe in miracles” splurged over the karaoke screen and into the minds of the only vaguely interested. Scott Morrison is loose, shirt unbuttoned, presumably because that’s how good uncontested neoliberal rort feels. What getting away with it feels like. I worry for the furniture in the room.

The Daily Telegraph, a newspaper that serves the exact same political purpose as The Herald Sun, just in Sydney, was notably more hi-vis about the whole thing than its blue-collar Melbourne cousin. 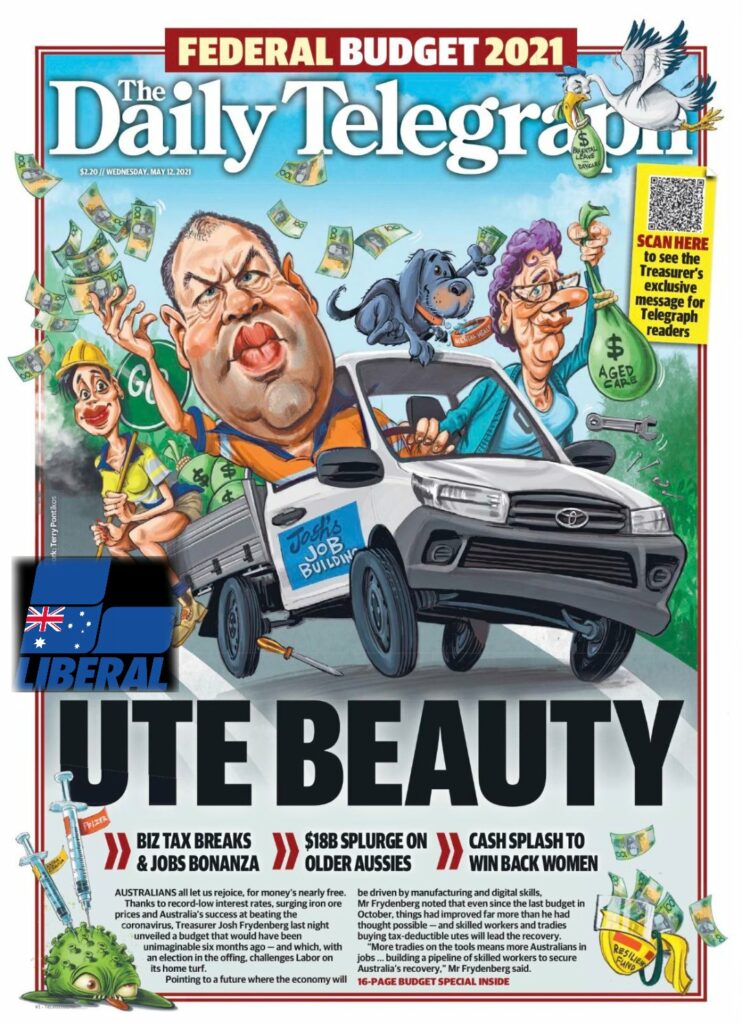 Josh Frydenberg, now a tradie, NewsCorp having purchased all of the optional outfits for our Ken doll of a treasurer, was depicted on the cover of Sydney’s largest newspaper throwing fucking cash from a big fucking truck, and that truck was going broom fucking broom.

This being the pandemic age, you may have noticed the QR code in the top right hand corner of the front page. The Tele’s 745,000 perpetually perplexed readers have the exclusive opportunity to receive a direct message from the tradie ute guy hurling out the cash. Ute-beauty.

Imagine still thinking these are newspapers.

Murdoch’s control over the national conversation not only bolsters this Government’s discordant popularity, it is a key reason why our emasculated opposition sees more success in offering little to no ideological opposition. The ALP routinely chooses to present itself as a small target to avoid the difficulties associated with a NewsCorp pummelling, and this internal doctrine is adhered to with religious fervour despite it yielding fuck all tangible success.

As we have already mourned here, Anthony Albanese, not a tradie, not lots of things for that matter, has decided this cruel, stupid, short-sighted budget is basically fine. The Labor Party’s dedication to not providing a real alternative vision for this country is as deep as NewsCorp’s commitment to providing the Liberal Party’s vision. I still hope the ALP wins the next election – but there is hoping, and there is also pulling woollen sheets over your eyes so you can sleep better at night.

Australia’s national conversation helps shape our imaginations, our ideas, our ambitions, and what we think possible. And the press, particularly the trashiest portions of it, is extraordinarily good at setting these boundaries in the cruellest gutters and drenching them in the most psychopathic half-truths.

An alarming number of this country’s actually effective journalists exist in a perpetual state of being sued by this Government. I know journos can be dickheads, particularly on Twitter, but as a general principle this sucks arse. Democracy rots with the combination of a cowed real press, an emboldened propaganda empire, and people as miserable and rotten as those in our Government.

Melbourne has a rare opportunity that should not be squandered. As Australian cities are concerned, it suffered disproportionately last year at the hands of not only the coronavirus, but also News Corporation’s death cult-like insistence on undermining confidence and compliance in one of the most effective coronavirus lockdowns in the entire fucking world. If you’d like to brush up on any of that, we covered it in detail here.

In the coming weeks, after we’ve gotten our shit together and launched an official funding drive (and slowed down on the wine a bit), you’ll start to see street posters that look something like this plastered across Melbourne. 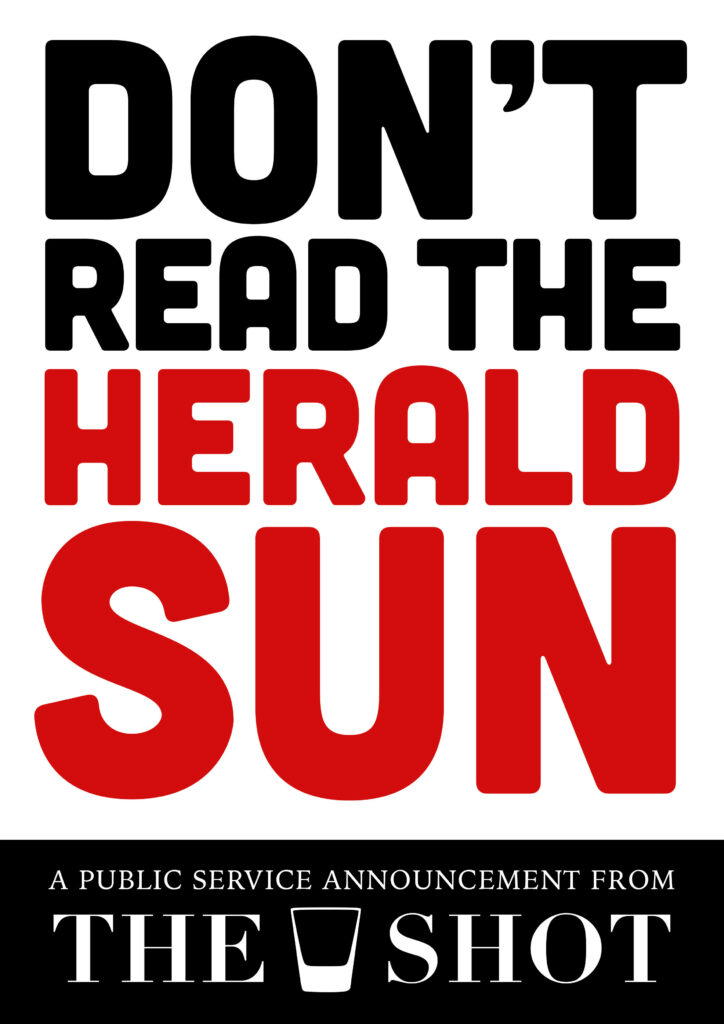 And maybe even this. 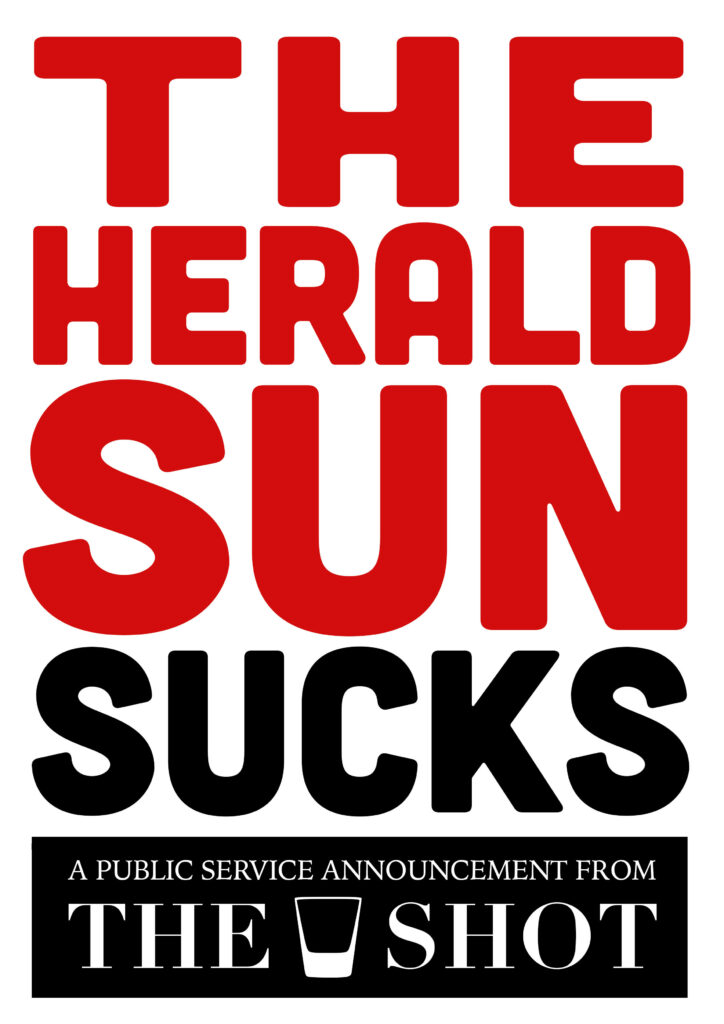 News Corporation’s systemic abuses of this once noble profession should not be tolerated. As Liverpool once did so effectively, our beautiful city should continue to scorn, belittle, mock, and ultimately run this cancer on our democracy out of town. It is simply responsible citizenry.

There is always hope, even when it is this veiled, this hard to see. But seeking it in our leaders and our mainstream press is folly. They are committed to continuing along the path of ruin and cruel mediocrity that Murdochracies always aspire towards.

Hope lies in all of us. It is in our neighbours, in our local communities, in our shared humanity. In the wonderful people that have plastered 10,000 Fuck Murdoch stickers across Melbourne. It is in everyone using their voice, power, privilege, their knowledge, kindness and humour, to stand for reason, compassion, and the healthy functioning of our democracy.